As the national bestselling Food Lovers’ Village mysteries continue, the merchants of Jewel Bay, Montana try to heat up chilly winter business with a new film festival. But their plans are sent reeling when a dangerous killer dims the lights on a local mover and shaker.

In an attempt to woo tourists to Jewel Bay and cheer up the townies, Erin Murphy, manager of the specialty local foods market known as the Merc, is organizing the First Annual Food Lovers’ Film Festival, popping with classic foodie flicks and local twists on favorite movie treats. But when her partner in planning, painter Christine Vandeberg, is found dead only days before the curtain rises, Erin suspects someone is attempting to stop the films from rolling.

To make matters worse, Nick—Erin’s brother and Christine’s beau—has top billing on the suspect list. Convinced her brother is innocent and determined that the show must go on, Erin must find who’s really to blame before Nick gets arrested or the festival gets shut down. And as the anniversary of Erin’s father’s death in a still-unsolved hit-and-run approaches, her own beau isn’t so keen on her leading role.

But the closer Erin gets to shining a spotlight on the killer, the more likely it becomes that she’ll be the next person cut from the program.

When a fairy named Apple Blossom is found dead in a fountain, Ren Faire lover Jessie Morton makes a wish she lives to regret—that her husband, Chase Manhattan, is no longer the Renaissance Faire Village Bailiff so he doesn’t have to look for the fairy’s killer and ruin their plans to go away for their first wedding anniversary.

Trapped in a timeless ‘It’s a Wonderful Life’ experience, Jessie is transported to a different Village to face the consequences of her wish where Chase isn’t the law keeper, and he’s not married to her.

Jessie’s fairy godmother who granted the wish tells her that she must find a way to make Chase fall in love with her again, and they must discover who killed Apple Blossom, if she ever wants to go back to the life she knew. 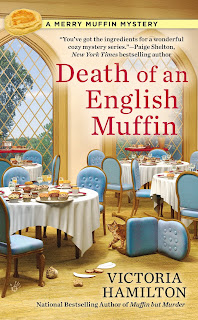 From the national bestselling author of Muffin but Murder, baker Merry Wynter returns with a fresh tray of muffins and a case that has authorities stumped.

Olivia's mom, Ellie, is always cooking up new schemes, but her latest idea has Livie and Maddie especially excited. Ellie's converting an old boarding house into an arts and crafts school—one that, of course, houses a kitchen for those interested in baking. But right as renovations start, the workers discover a pile of bones buried within the boarding house's walls, evidence of a long-forgotten crime.
Submitted by Unknown