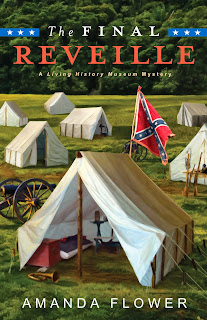 by Roy Renard from The Final Reveille
A father could never be proud of his child than I am of my girl Kelsey. She is the director of Barton Farm, a living history museum in Ohio’s Cuyahoga Valley. She took the job on three years ago and has done so many improvements to the grounds and events. The Civil War Reenactment happening this summer is the biggest event of them all. There are over four hundred reenactors on the grounds at this very moment.

As a student of the stage, I will of course play my part in the reenactment.

You should come! It is a fitting event for the celebration of the Fourth of July. The Revolutionary War might have earned our country independence from the British, but the Civil War, as horrible and bloody as it was, unified us and gave us not just an individual state’s identity like we'd always had but a national identity. Not to mention it ended the horror of slavery in this county. Kelsey doesn’t want anyone to forget what happened 150 years ago, and that’s why she brought the reenactment to the Farm. She's done an outstanding job.

Lately though, Kelsey has been under a little of pressure. The Farm is in financial trouble. It may even close if Kelsey can’t find a way to save it. Maxwell Cherry, the nephew of the Farm’s benefactress Cynthia, even threatened to close the Farm when his aunt is no longer able to manage her Foundation.

As if turns out for good or for bad, Maxwell won’t be taking over the Farm… because he’s dead. Kelsey found his body in the Farm’s brick pit. He was stung in the foot by a bee. Can you imagine?

Now, Kelsey has to find the killer to save the Farm and herself from being arrested. As her father, I will do whatever I can to help!

Amanda is still hosing the Maid of Murder Giveback through 9/1/15. All proceeds will for to The Charitable Pharmacy of Central Ohio. Learn more here!