When is an award more than an award? When it's a murder weapon! 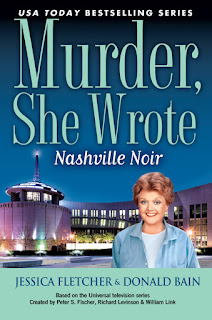 I was on the Cabot Cove committee that sent a talented young country music songwriter, Cyndi Gabriel, to Nashville, Tennessee, to learn about the music business, but I soon found myself in Music City when the young woman was being accused of murder. Detective Perry Biddle of the Nashville Police Department, was skeptical about my interest in the case, but--lucky for me--he reserved judgment. Here's my first encounter with Detective Biddle:

I was perusing the books on Biddle’s shelf when he returned. He took a candy bar from his pocket and put it on the desk, then removed his suit jacket and carefully draped it over the back of his chair. He was a short, stocky man with a thick neck, large chest, and muscular arms that were evident beneath his shirtsleeves. He wore a starched pale yellow shirt with a purple tie and suspenders to match. He was a fussy dresser, if not one I would describe as particularly stylish.

“This isn’t my office,” he declared. “I work out of the West Precinct. We cover Music Row, where the murder took place, but we’re undergoing renovations of the building so I hang out here.” He grimaced for a moment against an unspecified pain and said, “Okay, Mrs. Fletcher, here’s the deal. Just talked to the DA’s office. As it happens, Ms. Gabriel’s court-appointed attorney is in the records room now, going over some reports. When he comes out, you can ask him about putting you on the young lady’s visitors list. Judging from the way she’s been acting since we picked her up, she might not want to see you. Don’t be insulted if she stiffs you.”

“I hope she doesn’t,” I said, “but that’s her decision. I won’t be offended if she declines to talk with me.”

“I’ll say this for her,” he said, “she aced the alcohol and drug screenings. Clean as a whistle. Hasn’t seen the shrink yet, though. We put in for it, but the guy’s so busy he can’t do her until tomorrow. That’s what happens when you have all these whackos on the streets. We arrest one hundred and forty people a day in this city. Hard to keep up.” He ran a hand over his bald spot, a circle of pink scalp peeking out from beneath brindle-colored wavy hair.

“And the charge against Cyndi is murder?” I asked.

“The prosecutor will probably go for murder-two, unless her lawyer can negotiate it down to manslaughter.”

“Has she admitted to the assault?”

“No, ma’am. Says she saw him there, got scared, and ran out to call the cops. Of course, she never made that call. She just disappeared.”

“Did she give a reason for why she was there in the first place?”

“Says she had an appointment, but he kept her twiddlin’ her thumbs. Said she went in to tell him she couldn’t wait around anymore and found him on the floor. That’s her story, but we don’t believe it’s how it went down.”

“So far it sounds pretty circumstantial to me. Have you looked into any other possible suspects?” 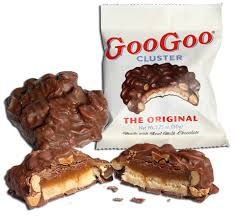 Biddle picked up the candy bar he’d left on the desk and tore open the wrapper. “Want one?” he asked. “Got another in my jacket pocket.”

“Should I know what that is?”

“Made right here in Nashville. Can’t call yourself a Southerner if you’ve never had a Goo Goo.”

I smiled. “I’ll have to try one some other time.”

He shrugged and leaned back, his leather chair squeaking under his weight. He munched on the candy bar, his face thoughtful. Finally he sighed and said, “We’re professionals, Mrs. Fletcher. Fact remains, your girl was at the scene, and her prints are on the trophy she used to kill him.” 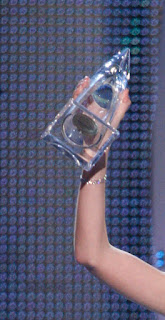 “A CMA, Country Music Award. Big and heavy. And before you ask again, yes, I had my guys check out the staff and whoever else was in the building.”

“And?”
“His secretary, a Ms. Anderson—Edwina’s her first name—said he was alive when she left for home at five and passed your girl in the hall coming in.”

“Is she the only one who saw Cyndi?”

“No, ma’am. The security fellow—” Biddle leaned forward, winced at the chair’s creaky objection, and ran his index finger down the front page of the report on his desk. “Clevon Morgan of Smoky Mountain Security Services said that when he tried the door to Marker’s suite at five forty-five, she came flying out of there like a bat out of you-know-where, crying and hysterical.”

“It’s not surprising that she’d be hysterical at discovering a man fatally injured. She might not even have known that he was still alive.”

Biddle sucked a bit of chocolate off his thumb and nodded. “If she hadn’t taken off, her story might carry more weight. But she hid out until we found her. Juries tend to see that as an indication of guilt.”

“She was obviously frightened and not thinking clearly at that moment,” I offered.

“Had a lot of time to think in the days after. Never came forward.”

“The jails are full of young people, Mrs. Fletcher.”

Nashville Noir is number 33 in the "Murder, She Wrote" series. All the books are original mysteries, and are not based on any of the television episodes.

Our good friend and award-winning country music composer David A. Stewart wrote a wonderful  song called  Nashville Noir. You can listen to it here and leave a comment below. We'll do a random drawing for a paperback of the book and a CD of the song.

Don's first love is jazz but we both love a good country song. What's your favorite kind of music?