A Little Murder to Talk About by Joyce Lavene 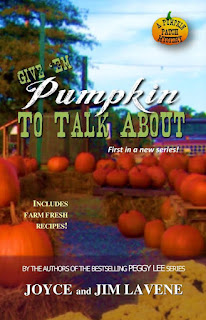 I wish I knew what to make of this situation.

It all started when my mother realized that the taxes were past due on my grandparents’ property in Misty River, Virginia, about an hour from our home in Richmond. We can’t just lose the property, she says. We have to get down there and straighten this out so we can sell it.

So I go down to Misty River to take care of the back taxes. It was careless of my mother not to notice what was going on with that. She’s a lawyer – so is my father and so am I. What will people think?

I find a local real estate person to sell the 180-acre farm my grandparent’s left and then find out my grandparents have never been declared legally dead.

They disappeared 16 years ago when I was twelve. We went to visit them and they were just gone – like a boogie man had spirited them away. My mother searched for them for a while and finally gave up when law enforcement told her they were officially ‘missing’.

Now she can’t find a copy of the deed for the man who wants to buy the property. I’m beginning to think that my mother really doesn’t want to sell the property. Now that I’m an adult, I don’t want to turn away from it either. I want to know what happened to my grandparents.

And then there’s Jack. He’s out there stalking around on the land. I think he lives in the barn. He says my grandparents asked him to take care of the place but that was a long time ago. He’s – oh I don’t know – the man-sized version of the boy I shared my first kiss with.

Now Jack and I are out here, and a man who said he had information about my grandparents has been killed – shot while he waited for me in their house.

I used to love this old place when I was a kid. From the river to the pumpkin patch, this was the best place on earth. I hope we can find out what happened to my grandparents. And I hope I can teach Jack NOT to sneak up on me! 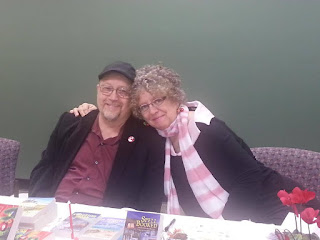 Joyce and Jim Lavene write award-winning, bestselling mystery and urban fantasy fiction as themselves, J.J. Cook, and Ellie Grant. Their first mystery novel, Last Dance, won the Master’s Choice Award for best first mystery novel in 1999. Their romance, Flowers in the Night, was nominated for the Frankfurt Book Award in 2000.

They have written and published more than 70 novels that are sold worldwide for Harlequin, Penguin, Amazon, and Simon and Schuster. They have also published hundreds of non-fiction articles for national and regional publications. They live in Midland, North Carolina with their family and their rescue pets—Rudi, Stan Lee, and Quincy.

Email ThisBlogThis!Share to TwitterShare to FacebookShare to Pinterest
Labels: #cozymysteries, #culinary cozy, #Give 'em Pumpkin to Talk About, #Joyce and Jim Lavene