Do You See What I See?

We haven’t met before. I’m usually a pretty quiet guy: until recently I lived alone in a Victorian fixer-upper I never have time to fix up; I manage a small scientific testing company I founded a few years back; and I spend my spare time doing some genealogy research (my family’s lived in the same part of Massachusetts for centuries) and giving tours of local historical sites. That’s how I met Abby Kimball.

I wouldn’t have said more than “hello” and “if you have any questions, just ask,” when she walked into the local mansion I was babysitting during a town-wide house tour event, but then she kind of passed out in front of me, so of course I had to make sure she was all right. And that’s what opened Pandora’s Box. Or something like that. You see, it turns out that we both see our dead ancestors.

I’d never talked about this with anyone until then, so I was very excited to find that somebody shared it. Not that I could tell Abby right away, because I didn’t want to interfere with what she saw—to give her any hints or suggestions about what was going on. (Yes, she gave me grief when she found out I’d been holding back, but I am a scientist and I wanted to get the facts first.)

Oh, and in the interest of disclosing all the facts, Abby and I kind of fell in love along the way. She moved in with me in that fixer-upper a couple of months ago.

That first meeting was—wow, almost a year ago now. It’s been a strange and interesting year, and I think Abby has helped me as much as I’ve helped her. And once we both accepted that we had this odd ability, we’ve been able to use it more (and when we join forces, we’ve found we kind of boost this ability for each of us). Seeing the dead is nothing to be afraid of—they can’t hurt us, and their lives are behind them. It just takes some getting used to.

Particularly because they keep showing up when we don’t expect them. It’s good that we have each other to confirm that we’re both seeing the person who isn’t there, except I think Abby has more ancestors in the neighborhood than I do, so she sees some that I don’t. It’s very confusing. And we haven’t found many other people who share this—yet.

We’re going to take a quick vacation on Cape Cod this month. I don’t know of any ancestors there, but I’ve been surprised before, especially when Abby is around.

There will be a new book in the series coming this fall--just as soon as Ned and Abby get back from Cape Cod! 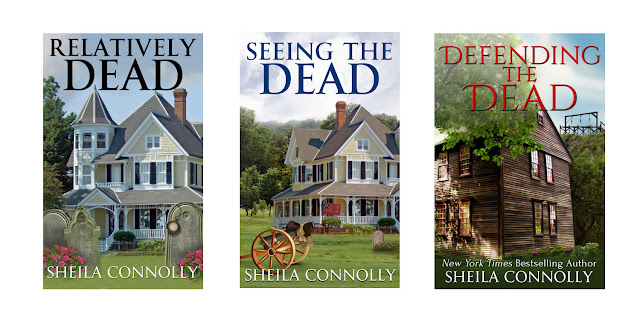 Available in ebook formats at Amazon and Barnes & Noble.
Submitted by Sheila Connolly