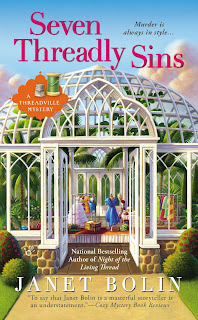 by Dora Battersby from the Threadville Mysteries by Janet Bolin

We didn't have air conditioning when I was a girl in the upper Ohio Valley. We opened windows, and if it was really hot, we'd go outside and sit in the shade of the maple tree. We'd read, talk, shell peas, snap beans, mend...

My pseudo granddaughter Haylee and her best friend Willow know that I love spinning and weaving. They're both so good at sewing that I'm not sure I ever told them that in my teen years, I sewed most of my own clothes.

And this is the time of year that I sewed most. School was out, and I was still growing, and I needed new clothes for school. I didn't care how hot it was, I cut and stitched and fitted and stitched some more. And as every seamstress knows, nearly every seam has to be pressed before the next one is sewn. I spent lots of time over a hot iron. Finally, I took the dresses, skirts, and blouses out under the maple tree, and hemmed them and sewed on buttons and did whatever else needed to be done by hand. Now, fifty-some years later, in August, I still get the itch to shop for fabrics and start cutting and sewing . . .

And wonderful fabric shops are right here in Threadville, and I spend lots of August in Haylee's air-conditioned sewing store, The Stash. I finger the fabrics and imagine what I would make for a schoolgirl back in the '60s. If mothers and daughters are discussing what to buy, I sidle close and listen in. Okay, sometimes I offer some pretty good suggestions. No one seems to mind.

The entire community is sewing right now, but they're not making school clothes. Haylee, Willow, Willow's assistant Ashley, my daughter Edna, and Edna's two best friends are stitching up outfits for a fundraiser fashion show. Mona, another shop-owner in Threadville, is also going to be in the fashion show, but if that woman makes her own outfits, I'll eat my spinning wheel.

It's very generous of the Threadville women (and the teenaged girl) to give so much of their time to help raise funds for scholarships to the new Threadville Academy of Design and Modeling (TADAM), but all of the Threadville women (except Mona) are creative, and TADAM's director has designed the outfits they're making. Before they saw his sketches, Willow and Haylee were excited at the opportunity of working with a real fashion designer. After, though, they lost some of their enthusiasm.

They're not telling me about the outfits they're making, and they're not showing them to anyone. I'll see the clothes at the fashion show. I hope the show goes well, but I have a bad feeling about it all. TADAM seems to have sprouted out of nowhere, for one thing, and I could find nothing on the Internet about the director. Type "Antonio" into a search engine, and you'll see what I mean. If he were really famous, wouldn't he come up as a fashion designer?

What hobbies do you have that you love so much you could do them even in the hottest weather if you had to?

Find out what really happened at the TADAM fashion show and the reception afterward in SEVEN THREADLY SINS, the fifth Threadville mystery, and how Dora nearly landed in trouble. 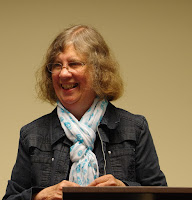