Splish Splash I was Taking a Swim 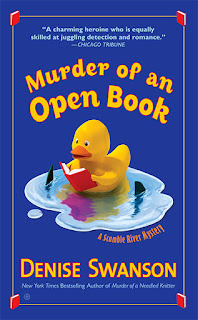 Hi! My name is Skye Denison-Boyd. I just added that third name three months ago and am trying to adjust to married life. My cruise ship honeymoon was awesome, even if I had to solve a murder to keep my mother out of the ship’s brig, and it’s been a little tough to get back into the swing of things as the Scumble River school psychologist.

Not that I don’t love my job, but the end of March is a tough time in public education. There are lots of high stakes testing and everyone is restless for spring break, especially the teachers. Truth be told, tempers can get a little frayed the week before vacation. A faculty member that has rubbed everyone the wrong way all year suddenly becomes an unbearable irritant. I usually try to soothe everyone’s nerves, but that’s hard to do if the staff member in question has an unreasonable vendetta against me.

Plus, I have to admit, I’m not my usual cheery self. I can’t tell you why since I’ve promised my new husband Wally to keep quiet for a few more weeks, but it’s tough being nice to someone when all you feel like hurling every morning.

Still, I’ll reign in my inclination to barf on this teacher’s feet and avoid her as much as possible. After all, as long as no one gets murdered, I guess the rest doesn’t matter. Just keep your fingers crossed for me that no bodies turn up. I am not in the mood to be investigating a murder.

If you’re interested in Skye’s next adventure, read all about it in Murder of an Open Book, which debuts September 1. It can be preordered at