Back to School Again! 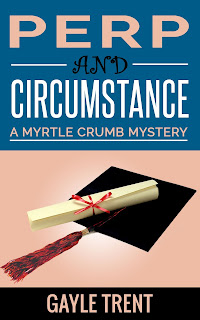 Myrtle Crumb of Perp and Circumstance by Gayle Trent

Can you believe it's September already? Where'd our summer go? It seems like only yesterday, I was trying to help one of my granddaughter's teachers out of a mess.

You see, Sunny--Crimson's her given name, but she's always been my little sunshine so I call her Sunny--called me one day just before middle school graduation, and she was crying! Nothing breaks a grandmother's heart quicker than knowing your grandchild is hurting. I got her to tell me what was going on zippity quick.

Turns out, her favorite teacher had been suspended after marijuana was found in one of his drawers. One of his desk drawers, that is. Don't be like Melvia and think the man had stuffed some weed down his pants. If that had been the case, I'd have had to go against Sunny's belief that the teacher was framed no matter how much it hurt her feelings. I mean, even Houdini would have had a hard time slipping a plastic bag of marijuana into your underwear without you realizing it. Am I right?

Anyway, I believed in my Sunny's gut feelings on this one and told her I'd take on Mr. Cole's case. I went to the school and snooped around a little bit there, and then I went to see the teacher himself. Well, wouldn't you know it? That Mr. Cole was just as handsome as he could be! I'm thinking if he's not guilty and I can get him out of this mess he'd make Faye the perfect match.

How do y'all feel about matchmaking? Ever had a match made for you? Ever made a match? How'd it go?

Perp and Circumstance will be released on September 22 and is now available for pre-order! If you do pre-order, please enter the giveaway for a $10 Amazon gift card!