Complements of the Season, 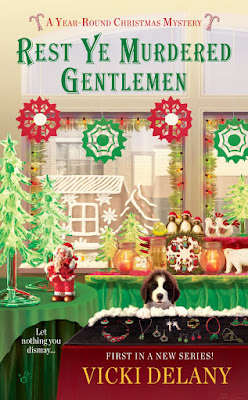 Christmas! How I love it. I love everything about the holiday season, from the weather (bright blue skies, fresh snow, crisp chilly air), to the food, the decorations, the gifts, and above all the sense of love and family.

In my family, Christmas is extra special, because my dad is Santa Claus. Of course he’s not really Santa, I know that.  But I sometimes do wonder. He seems to have this way of knowing what a person wants before they so much as say so. My dad’s name is Noel, because he was born on December 25th.  My name is Merry, because, well, because my family loves Christmas, I guess.

I am the proud owner of Mrs. Claus’s Treasures, on Jingle Bell Lane. I stock everything you need for holiday decorating, as well as gifts such as jewellery and a special line of toys.  Many of my goods are things you won’t find anyplace else – hand made by local artisans.

Everyone in Rudolph, New York, loves the holiday season. In fact, we love Christmas so much, we celebrate it all year round. We have two Santa Claus parades, the big one in December and a fun one for Christmas in July.

This year I have high hopes for winning the best-in-parade trophy for my Elves Workshop float.  The stiffest competition will be from the Victoria’s Bake Shoppe float.  Vicky is my best friend since kindergarten. Except around parade time. Then I hate her, because she usually wins the trophy.

Now, as soon as George gets his darted tractor started, my lovingly-decorated float, full of the kids from my mom’s vocal classes dressed as elves, will join the parade.

Oh, oh. George is climbing down from his seat. He’s opening the front flap of the WWII era tractor that belongs more in a museum than pulling a float. Men are gathering around; they’re all peering into the mysterious depths.  George is scratching his head.

The parade is going ahead without me!

Rest Ye Murdered Gentleman will be released on November 3rd and is now available for preorder from Amazon, B&N, and all booksellers.

As a Christmas gift to YOU, I'm having a draw for this small tree decoration, featuring Matterhorn, Merry Wilkinson’s Saint Bernard puppy. As shown! (Entries from Canada and US). Leave a comment to be considered for the draw. 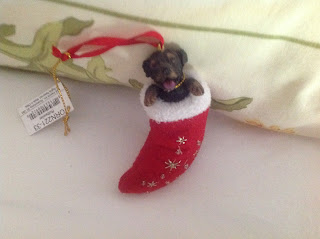