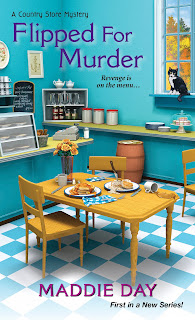 Hey, there, Robbie Jordan here again. I wanted to be sure you all met Officer Buck Bird. He's second in command at the South Lick, Indiana, police force. He kind of comes across like a country hick, but he's plenty smart, and kind, too. He's tall, skinny, and always hungry, so he drops into Pans 'N Pancakes for a meal pretty much every day. I wish I had a picture of him to show you!

Here's a little bit of a scene near the start of Flipped for Murder.

Buck Bird slid into the chair opposite us and laid his uniform hat in his lap. The guy had the skinniest, longest fingers I'd ever seen. They matched the rest of him, from his elongated face to feet that just kep on giving. His sandy hair stuck up like he'd just gotten out of bed before he used those serpentine fingers to snake it back into place.

"Sure smells good in here," Buck drawled in the local way, sounding like his tongue was glued to the bottom of his mouth. "How'd the grand op'nin' go?

"It's still going. All day long, in fact. We had a busy breakfast rush and are hoping for the same at lunchtime. What can we get you?" I figured he had a serious hollow leg, being so skinny and all.

"Oh, it don't matter. One of everything?" He raised his eyebrows in a hopeful look.


See what I mean? I wish I had a picture of him to show you. Ya gotta love the guy.

So tell me, who's your favorite police officer?
Submitted by Edith Maxwell