Too Big to Trick or Treat? 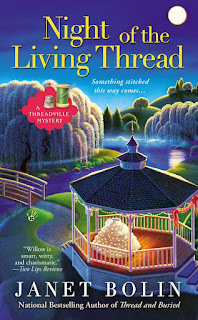 by Haylee Scott from the Threadville Mysteries by Janet Bolin

At first, I didn't recognize the twins when they walked into The Stash. Jeff and Jenn had taken a kids' sewing course from me at The Stash five years ago, when they were about eight. Now Jenn was nearly six feet tall, and Jeff was taller.

Jenn did the talking. "We went trick or treating last year when we were twelve, and a few people slammed the door on us. They said we were too big."

Jeff gave his sister a pretend glare. "It didn't help that she made herself up as a zombie bride. She even scared me."

Jenn elbowed him. "He wore his football uniform. He's huge in that. He scared little old ladies."

Jeff knuckled her head. "Not as much as you did."

Jenn frowned. "Okay, we've accepted that we're too big to go door to door for candy, and there's a dance at the junior high that night, but the fun part is being out in the dark and scuffling through leaves and seeing the little kids in costumes and hearing them yell 'trick or treat' and just, well, joining in the excitement."

"And we don't really need pillowcases full of candy." Jeff sounded like he was trying to convince himself.

"So," concluded Jenn, "we heard you were running a costume-making course for little kids, and we wondered if we could help with it."

Of course I agreed. Jeff and Jenn are naturals. Their ideas are creative, and the little kids clamor for their attention. It might be the most fun course I've ever taught.

Even better, on Halloween, Jeff and Jenn are going to dress up and go out, but instead of knocking on doors, they'll be wandering around the streets of Threadville, giving kids glow sticks, encouraging drivers to slow down, and just generally keeping the smaller Halloweeners stay safe.

What creative things do you do around Halloween? One lucky commenter will receive a copy of NIGHT OF THE LIVING THREAD.

As you can see, Janet Bolin likes dressing up--she concocted that hat to match (sort of) the outrageous wedding skirt on the cover of NIGHT OF THE LIVING THREAD. 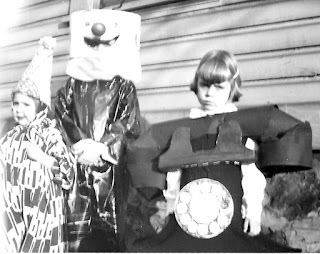 But there was a time when dressing up made her frown.


And here are some more fun cozy mysteries that take place around Halloween: 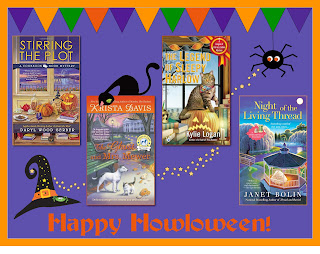