While the cats are away ... our guest is Victoria Thompson! 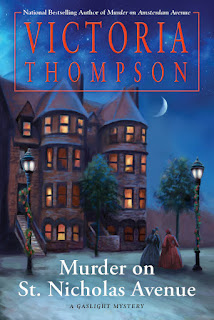 Leave a comment below by midnight, Sunday, November 1, for a chance to win a copy of MURDER ON ST. NICHOLAS AVENUE!

While the cat’s away…

Hello!  I’m Maeve, Mrs. Brandt’s nanny, and the reason you’re hearing from me is that Mrs. Brandt and Detective Sergeant Frank Malloy have gotten married and are in Europe on their honeymoon.  They left me in charge of the house and the children while they’re gone, so naturally when a lady came to our door just before Christmas looking for help, I couldn’t refuse. A young bride had been accused of murdering her husband, but her mother was sure she was innocent.  I knew I couldn’t do this alone, so I asked Gino Donatelli for advice.  Gino is back with the New York City Police Department now that he’s home from the war in Cuba, and he’s kind of sweet on me, so he was glad to help. Then Mrs. Brandt’s mother got involved, although I’m still not sure how.  Mrs. Decker somehow always manages to get her way, though.  Then the next thing I know, Mr. Decker was involved, too. We started out just asking him for some advice, but he couldn’t let some young girl and an inexperienced policeman solve a murder on their own.  Even Mr. Malloy’s mother lent us a hand now and then.  It wasn’t easy, and a few times it was downright scary, but we managed to figure out who the real killer was.  When we were done, everything had changed, too.  When Mr. and Mrs. Malloy (Mrs. Brandt is Mrs. Malloy now) got home from Europe, they were really surprised and…

Well, I don’t want to give anything away.  You’ll have to read Murder on St. Nicholas Avenue to find out.


Leave a comment below by midnight, Sunday, November 1, for a chance to win a copy of MURDER ON ST. NICHOLAS AVENUE!

Victoria Thompson writes the Agatha and Edgar® Nominated Gaslight Mystery Series, set in turn-of-the-century featuring midwife Sarah Brandt. The18th book in the series is Murder on St. Nicholas Avenue.  She also contributed to the award-winning MANY GENRES/ONE CRAFT. Victoria teaches in the MFA program in writing popular fiction. She lives in the Chicago area with her husband and a very spoiled little dog. She is a member of Sisters in Crime and Novelists, Inc.