Simon Kirby-Jones, from the "Village Vampire" series by Dean (aka Miranda) James 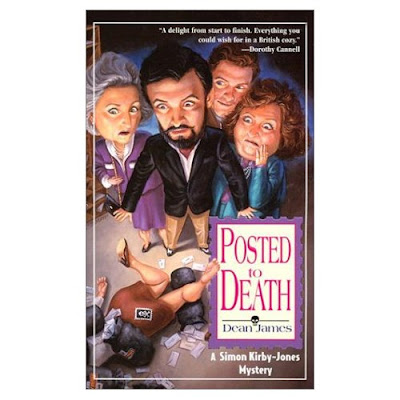 Nor does he know I'm gay.

If he knew either of these facts about me, I'm not sure which would cause his no-doubt-fatal heart attack. The Reverend Neville Butler-Melville is just a tad old-fashioned, shall we say? Having a vampire--and a gay one, mind you--on the committee to raise money for the church fabric wouldn't sit well with the bishop, of course, and dear Neville might find himself forcibly retired from the church.

Drearily conventional as he may be, Nevile is rather scrumptious looking in his ecclesiastical kit. This was my third visit to the vicarage, and I braced myself for a sip of the hideous bargain-basement tea that Letty Butler-Melville served, in the interest of economy, I supposed. As I raised the teacup, I let my eyes linger on Neville, who was more than enough compensation for the awful tea. Neville's shiny black priest's togs complemented his pale good looks: jet black hair with a touch of gray at the temples, an aquiline nose, full, sensuous lips, and a muscular frame well suited to the cover of a romance novel. Dear Neville at forty is quite a dish. Although I'm not a regular churchgoer, I took one look at those deep emerald eyes of his and said, "Yes" when he approached me yesterday afternoon to serve on a parish committee.

Regardless of what you may have read in all those trashy vampire novels, we can set foot in churches without horrible things happening to us, and the sight of a cross has no effect. Unless, of course, it's cheap and vulgar, and then I promise you I'd shudder at the very least.

But more of that later. Right now I was more interested in the composition of the vicar's tea party. Having lived in the village of Snupperton Mumsley for a scant month, I still had not met many of the leading citizens, though I had glimpsed them on the odd ramble through the village. Another reason that I decided to join the committee: I needed to get to know my neighbors. We vampires no longer fade into the woodwork, as we once did, and being visible in the community is a good way to allay the suspicions of anyone who might otherwise think we're odd.

And so begins Posted to Death, the first of four novels featuring Simon Kirby-Jones, resident of Snupperton Mumsley, and occasional amateur sleuth. To read more about the dishy vicar and the denizens of this particular village, you can find links to ebook versions of the book via http://www.catinthestacks.com/audiobooks.html
Submitted by Miranda James