Good Luck To You!

by Rory Chasen, superstition agnostic and pet store manager, whose adventures are memorialized in the Superstition Mysteries by Linda O. Johnston

Hello.  I'm Rory Chasen.  As you may know, my stories are featured in the Superstition Mysteries.  Not that I set out to solve mysteries, but they seem to appear around me, and I wind up having to help friends by finding the killer.  The first, Lost Under A Ladder, was published in October, and the second, Knock On Wood, came out in October of this year.  And yes, I've been told that Unlucky Charms, the third, will be published in October of 2016.  Do you see a pattern here? 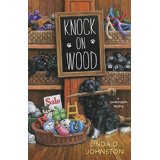 In any event, I've been advised that there is a daily giveaway here on Killer Characters during the holiday month of December.  That will include a copy of Knock On Wood to the lucky winner, one of those who leaves a comment on this post.


Now, I've done a lot of research on superstitions since moving to Destiny, .  Nearly anything you can think of has a superstition associated with it--and that includes winning!  Most of the superstitions I'm familiar with on that topic involve things like picking the right lottery numbers or trying to ensure a win if you're a baseball player.


As a result, I can't really tell you how best to win this day's contest here, other than making sure you leave a comment.  You can always cross your fingers or knock on wood that you're the winner.  But this situation doesn't lend itself to your choosing whether you leave the first comment or exactly which comment slot you select, since they appear in the order sent to post.  If you're picking lottery numbers, for example, you might decide to use your favorite race horse's number, or your license plate number, or your birth date, for luck--but that won't work here.


One thing you could do is to wear your birthstone while you're commenting and rub the gem for luck.
In any event, you can be certain that I, and my lucky dog Pluckie, wish each of you the best of luck.  I hope you're the winner!