To Date or to Sleuth, that is the Question

Our Season's Readings Contest has begun! I am giving away a signed copy of either Dead Between the Lines or Murder of an Open Book—winner’s choice. Leave a comment today or Thursday and on Friday I will pick a random winner! Sorry! U.S. entries only. 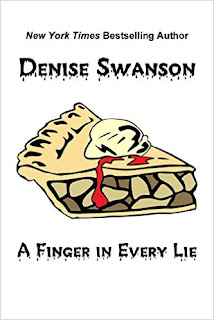 Hi! My name is Steph. When my husband died, I discovered that he had drained our savings and cashed out all our investments, leaving me with a couple thousand in our personal checking account and not much else. A while back, I had lost my job as a reporter and because I had decided to write the great American novel instead of seek other employment, Kevin’s death left me close to penniless.

Having few other options, I moved in with my mother, Millicent Spicer. After my dad divorced her, Mom used most of her ready cash to buy a house in Bellbridge Estates, 55+ gated community. If the development had been what the advertisers promised, all would have been well. But it wasn’t and Mom was nearly as short of funds as me.

At first, we hoped the developer would make things right, but when he was killed (A Finger in Every Lie) that possibility was off the table. Although it wasn’t fun being the chief suspect in the guy’s homicide, it was pretty cool helping the police figure out who really did it.

Now that the president of the homeowners association has been murdered, the deputy that worked the other case has asked me to help him solve this one too.

Either that or he’s asked me on a date, or both. I’m not really sure.

---Denise Swanson is the New York Times bestselling author of the Scumble River, Devereaux’s Dime Store, and Stephanie Danielson mystery series. As well as the Change of Heart romance series.


Read more about Stephanie in the short stories, A Finger in Every Lie and All I Want for Christmas is You…Dead.
Submitted by Denise