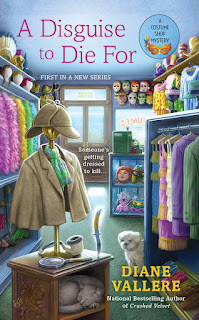 People always ask me why I wear costumes. Honestly, half the time I want to ask them why they don’t! Most people I meet are so busy trying to be someone they’re not that it would make sense. But me? What you see is what you get—for the most part. I mean, I’m not really a cowgirl or the captain of a ship, but I do like to occasionally dress like one.


It wasn’t like it was a conscious decision to start wearing costumes. It was more organic than that. My dad—he’s the owner of Disguise DeLimit, hands down the best costume shop in all of Nevada—did the best he could raising me on his own. Sometimes that meant my back to school clothes came from our inventory instead of the mall. When I got old enough to buy my own clothes, it was too late to teach me that I should be shopping in department stores, which I think made dad happy because it also meant I got asked out on a lot less dates. I’ve learned to think of it as the great screening process. If you can’t handle a clown tie every once in awhile, you’re probably not the guy for me.


With no biological mother in the picture, I turned to a local party planner named Ebony Welles to fill that surrogate role. Ebony is a feisty black woman who dresses like Foxy Brown and drives a coffee-colored Cadillac Coupe de Ville. She has a combed out afro and even though she’s in her fifties, she still wears the clothes she had in high school. It’s no wonder she never questioned my style.  ﻿


The rest of my family is rounded out with my sourpuss cat, Soot. I adopted him from the candy store next door. I’ve tried to get him into costumes, too, but the most he tolerates is a tiny necktie that dangles from his collar. In addition to being your above average mouse catcher, Soot does double duty as my therapist, helping me talk through my fear of abandonment and trust issues. (I gave up therapy after my shrink fell asleep during a session. Talk about bad for the self-esteem!)


Pretty soon you’re going to get to read all about my friends and family in A DISGUISE TO DIE FOR.  Maybe you’ll start accessorizing at costume shops too!


A DISGUISE TO DIE FOR, the first Costume Shop Mystery, comes out Feb 2. You can preorder it anywhere books are sold!
Submitted by Unknown