Watching My Back on the Not-So-Mean Streets

I love being a cop.

Most of the time. 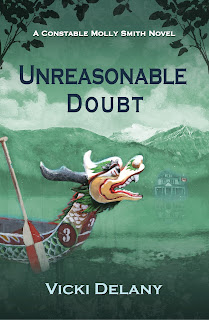 I never grew up wanting to be a police officer. That wouldn’t have gone down very well in my family, as my parents, particularly my mom, were old-time-hippies. Mom was arrested at the 1968 Democratic Convention in Chicago (a badge of honor she wears to this day), and my dad was a
Vietnam War draft-dodger.

But life, as they say, happens when you’re making other plans, and here I am.  Constable Second Class with the police in my hometown of Trafalgar, British Columbia.

I’m lucky that by the time I came along, women were an accepted part of any police department. I didn’t have to fight to be accepted because of my gender, and I didn’t have anything to prove beyond what we all had to prove.

I know that’s not the way things are everywhere. I hear stories of women working in departments where they’re not welcome and sexual harassment still happens, sad to say.  It’s not only the older guys who don’t think women can do the job. Some of the young ones seem to have crawled out from under rocks.

But, here in Trafalgar, it’s been a pretty good gig. I’ve got my partner’s back and I know he’s got mine.

Walter Desmond is back in Trafalgar after spending 25 years in prison for a murder it turns out he probably didn’t commit. And it looks as though the TCP were, at best, incompetent, and at worst, deliberately railroaded him.

Some of the old guys aren’t happy to see Walt free and walking the streets of Trafalgar. And Constable Dave Evans is pretty friendly with some of those old guys.  He’s up to something. He deliberately disobeyed a direct order of our Chief Constable, Paul Keller, to stay away from Walt Desmond. I know what he did, and Dave knows I know.

The question for me is, what do I do about it? Do I betray my colleague and thus the thin blue line?

Do I rat him out, because it’s the right thing to do?

I no longer feel that Constable Dave Evans has my back. And that is not a good place to be, not out on the streets.

Unreasonable Doubt is the 8th in the Constable Molly Smith series from Poisoned Pen Press. It will be released on Feb. 2nd and is now available for pre-order.

And now a word from our sponsor:  Vicki will be at Left Coast Crime in Phoenix. As well as appearing on two panels, she’ll be acting as the chair of the Crime Writers of Canada at the CWC reception on Friday evening, and at the Poisoned Pen Press Discover Mystery breakfast on Saturday. Vicki will also be at the Poisoned Pen Bookstore on Wednesday February 24th for their International author night. Hope to see you at one (or all!) of those events.