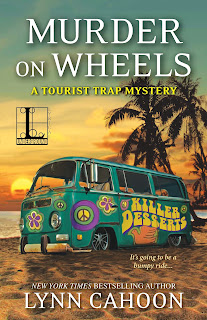 By Jill Gardner of Murder on Wheels
A Tourist Trap Mystery, by Lynn Cahoon

We’ve all had hobbies that we’ve loved. When I was right out of college, I took up counted cross-stitch. It was like a puzzle and a craft all rolled into one. I never knew what my creation would look like when I was done. But I guess I’m not a joiner. I never found a group of women to sit and chat with while I worked on my latest project.

Others need that sense of community. Kacey Austin was one of those people. Kacey served as president for the local geocaching club for over five years. In fact, that’s where we first met. I didn’t know she was Dustin Austin’s wife. Yep, the same guy that had been dating my friend, Sadie for months.

Oh, by the way, I’m Jill Gardner, owner of Coffee, Books, and More. It’s the only coffee shop in South Cove. Or will be until Kacey opens up her Good For You Desserts truck. Although as crazy about nutrition as she is, she’ll probably only serve green tea. My shop has the not-so-good-for-you-but-yummy stuff. Like Sadie’s Caramel Apple cheesecake. And coffee. Deep, full flavored coffee. High and low octane, your choice.

Anyway, I met Kacey at one of these geocaching events while Greg and I were on a double date with Amy and Justin. Justin’s crazy about the ‘sport.’ Me, not so much. If I’m going to follow a treasure map, there better darn well be real treasure at the end.

Austin hates it when he sees us talking. Probably thinks I’m going to tell his lovely wife what a rat he is. But I don’t care. He should be sweating this. If she doesn’t know about his dating Sadie, Kacey will soon. South Cove is too small to hide that big of secret.

And speaking of secrets, Aunt Jackie has one of her own. I haven’t been able to weasel it out of her. Yet. But I will.

Time to open up the shop and get the coffee ready. Come on in if you’re nearby. I’d love to meet you and catch you up on the rest of the gossip. There’s always something going on in South Cove.

The food truck craze has reached the charming coastal town of South Cove, California, but before Jill Gardner—owner of Coffee, Books, and More—can sample the eats, she has to shift gears and put the brakes on a killer . . .

Now that Kacey Austin has got her new gluten-free dessert truck up and running, there’s no curbing her enthusiasm—not even when someone vandalizes the vehicle and steals her recipes. But when Kacey turns up dead on the beach and Jill’s best friend Sadie becomes the prime suspect, Jill needs to step on it to serve the real killer some just desserts.

Lynn Cahoon is the author of the NYT and USA Today bestselling Tourist Trap cozy mystery series. Guidebook to Murder, book 1 of the series won the Reader's Crown for Mystery Fiction in 2015. She's also the author of the soon to be released, Cat Latimer series, with the first book, A STORY TO KILL, releasing in mass market paperback September 2016.She lives in a small town like the ones she loves to write about with her husband and two fur babies. Sign up for her newsletter at www.lynncahoon.com