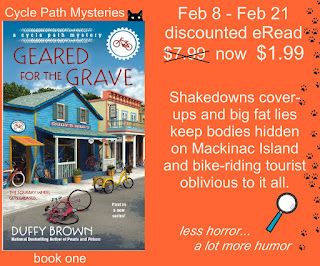 Notice the from part? Yeah, I’m now back home in the land of milk and honey, Mackinac Island. I was born and raised here then had in itch for the big city.

Detroit is not for sissies. I did under cover for months and had special training to get through it. Talk about tough! But I did it and no one ties bows, hangs bunting, arranges flowers, china and crystal and can dance a waltz better than me.

Yeah, yeah, yeah, I got a lot of crap from the other guys on the force but this was a rough case and to underline the point I got caught in a shoot-out. Money went missing and some not too savory characters are looking for it and guess who’s in their cross-hairs?

So here I am back at Fudge Island for a little R&R since the regular local police chief is laid up with back surgery. It’s a good time to visit with my mother who owns a fudge shop right next to Rudy’s rides, a bicycle shop. And there’s the rub.

All was fine until one night I was sitting at my favorite bar, the Stang, having a beer and got this 911 phone call...
“Dead person on hill.”
What the heck? I thought to myself. This is Mackinac Island there are no dead people except up at the cemetery. It was obviously someone drunk-dialing the police as does happen more often than you’d think around here. I disconnected only to get another call that went like...

“Look, you jackass. There’s a dead woman up here on Huron Road by some steps so put down the brewski, drag your sorry self off your barstool...I can hear that jukebox in the background... and get your big fat island butt up here now.”

And that is pretty much how I met Evie Bloomfield the bane of my life ever since.

She’s from Chicago and here to help out at the bike shop. That part I can live with but now she’s knee-deep in trying to prove that the guy who owns the bike shop is not a murderer. She’s wrong, Rudy is the killer and she’s going to have to realize I’m right...right?

Now how do I convince her to just go back to Chicago and let me handle things? Got any ideas?