And the Big News Is….

By Sassy Cabot, from Well Read, Then Dead and Caught Read-Handed in the Read ’Em and Eat cozy mystery series by Terrie Farley Moran. 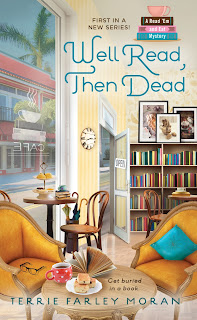 We are all very excited in Fort Myers Beach! Terrie Farley Moran’s short story “A Killing at the Beausoleil” has been nominated for an Agatha Award for Best Short Story. And I’m delighted to let you know you can read it right here.

And I’m here to tell you that is not a cliché.

A while ago Bridgy Mayfield, my best friend since our Brooklyn grade school days, and I took a giant leap to leave the chaotic past behind us. Bridgy’s mayhem involved a creepy ex-husband who played Mrs. Robinson with a member of his mother’s mahjong group. My upheaval was simpler. The company I’d worked for since college was leaving New York City and taking my job with it. 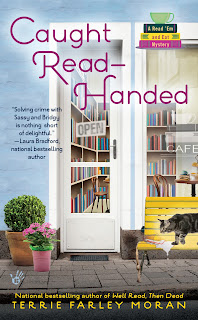 So we packed up and moved to the barrier island community of Fort Myer Beach Florida. Of course our first day in our new home turned out to be a hassle what with the dead body on the patio and all. (I’m guessing you read about that in “A Killing at the Beausoleil”.)

Once we got past that bizarro-world experience, Bridgy and I went about setting up our new lives, leaving murder behind us forever, or so we hoped. We opened a bookstore combined with a breakfast and lunch café and we called it the Read ’Em and Eat. We worked really hard to get it going. We were fortunate enough to hire Miguel Guerra, chef extraordinaire, to run our kitchen. You may remember Miguel, he stopped by Killer Characters last summer.

Life is never simple. When Miguel fell in our kitchen and broke his leg, Bridgy and I were devastated. Bridgy's Aunt Ophie, a fabulous if messy cook, came to rescue us in the kitchen, but then we discovered that a beloved book club member had been found dead in her own living room. Life at the beach isn't always as easygoing as it seems.

I notice that Miguel had a giveaway for a tee shirt, so I supposed I’d better offer one as well. Post a comment and your email addy below and you will be entered to win a Caught Read-Handed tee shirt. Giveaway closes at midnight Monday February 22nd. 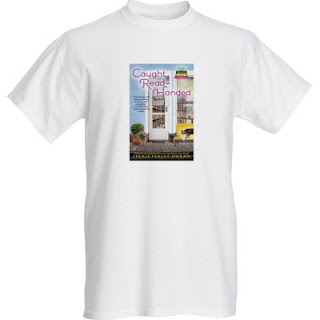 As an aside, our author, Terrie Farley Moran, is traveling today so she may not be able to respond to your comments until the end of the weekend but I can tell you that she is thrilled you stopped by. All of the Read ’Em and Eat folks are eager to come and talk to you on the 19th of each month. (Truth be told Aunt Ophie might be a bit too enthusiastic.) So come visit with us anytime you need a day at the beach.