by Ebony Welles from the Costume Shop Mysteries by Diane Vallere
GIVEAWAY BELOW!
I can’t believe I said yes to this job. Coordinate Blitz Manners’ birthday party on short notice. Sure, I own Shindig! the most happening party planning business in Proper City, but Blitz is the most spoiled kid in town. I would have liked nothing more than to turn away his business and set a good example for Margo.
But Blitz had to go and bring up the past.  When the time comes for me to talk about that, I will, but not a minute sooner. Let me tell you, that little punk better watch his step. I’m older than him and a whole lot wiser too. I don’t make decisions because of money. You got that? Ebony Welles is her own woman and nobody’s gonna change that. 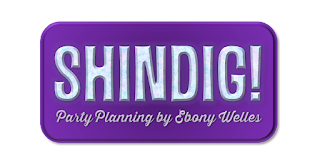 But girl, that was a long time ago. I was knee high to a grasshopper and didn’t know there were people I was supposed to talk to and people I wasn’t. I was raised to think that everybody was equal. I don’t have kids of my own, but when I met that little girl Margo Tamblyn twenty-seven years ago, raised by her dad in a costume shop of all places, I knew I had to pass that lesson along to her. Jerry Tamblyn didn’t raise Margo to judge people based on skin color and I like to think I had a part in that. She’s grown up to be a fine woman (though a little too independent if you ask me). It wouldn’t kill her to settle down right here in Proper City.


When Blitz brought up something he’s too young to know anything about, I had to take his job to prove a point. There's another reason I said yes to Blitz. No way can Jerry make forty detective costumes for Blitz’s party, not while he’s recovering from his heart attack. That means Margo will stick around for more than a couple of days.  And if she comes to Blitz’s party to help me out, she might even meet a nice young man.
In the meantime, I better get to work. I gotta plan the menu and decorations for a Blitz Manners-sized party. I’m a professional so I’ll do the job I was hired to do, but one of these days, that cocky attitude of his is gonna get him into trouble. Wonder if I’ll be around to see it?
Diane, the author here. You can find all about Ebony's past (plus Margo Tamblyn and Disguise DeLimit)  in A DISGUISE TO DIE FOR that just came out this week! Didn't get your copy? Leave a comment below and be entered to win one.
No sooner does former magician’s assistant Margo Tamblyn return home to Proper City, Nevada, to run Disguise DeLimit, her family’s costume shop, than she gets her first big order. Wealthy nuisance Blitz Manners needs forty costumes for a detective-themed birthday bash. As for Blitz himself, his Sherlock Holmes is to die for—literally—when, in the middle of the festivities, Margo’s friend and party planner Ebony Welles is caught brandishing a carving knife over a very dead Blitz.
For Margo, clearing Ebony’s name is anything but elementary, especially after Ebony flees town. Now Margo is left to play real-life detective in a town full of masked motives, cloaked secrets, and veiled vendettas. But as she soon learns, even a killer disguise can’t hide a murderer in plain sight for long.
INCLUDES RECIPES AND COSTUME IDEAS!