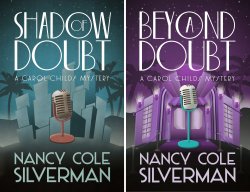 A Doctor of Disguise
From Beyond a Doubt, a Carol Childs Mystery
By Nancy Cole Silverman

***Giveaway is Closed. Congrats to Linda May!***

My name is Dr. Malcom Diamond, perhaps you’ve heard of me? My nemesis, Carol Childs, a reporter for the local talk radio station, has managed to include me in several of her news reports. She believes I have something to do with the recent disappearance of a certain young woman; a ludicrous accusation.

As a doctor, and a member of the Los Angeles City Council and the police commission, I can’t imagine how she came to such a conclusion. I’m committed to the preservation of life and well-being of those in my care, but if she doesn’t stop with this line of questioning, I’ll soon have to do something about it.

The truth is, Miss Childs has been working and playing too hard. Recently she was seen doing a pub crawl down on Hollywood Boulevard with her underage teenage daughter and best friend when she ran into a bit of trouble.  Her daughter disappeared and she’s convinced I know something of it.  Poor Miss Childs, I’m sure after taking some time off she’ll be fine.

She’s accused me of a double identity and refers to my alter ego as the Mad Dr. Diamond. She believes because I resemble Clark Gable, and as a side business employ actors as impersonators for Hollywood parties, that I’ve used his talent to attract young women to my employment.  I don’t know how she comes up with such wild ideas. But if she doesn’t watch herself I may have to break one of my rules and silence her.  Too bad, she’s an interesting young woman and I’m so fond of pretty things.

Leave a comment below and be entered to win a copy of BEYOND A DOUBT!