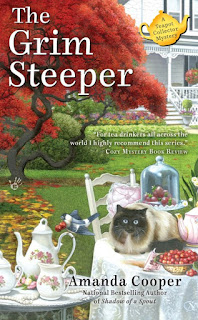 So, I've been watching a lot of TV late at night, what I call Murder at Midnight. I'm addicted to all these true crime shows, like 48 Hour Investigates, Hollywood Confidential, The First 48, Murder in Paradise, City Confidential, Deadly Affairs... wow... there are a lot of them.

Maybe I ought to vary my watching habits.

'Cause after a while you kind of get skeeved out, you know? I work in the tearoom and I watch folks, and wonder... who among these nice folks could do something so drastic? Then I shake myself; I know better. Despite all those shows I know that few people would even consider murder, much less to someone they love.

But then, when it happens in your town, when a prominent man like the dean is murdered, you wonder; will it end up like in the true crime shows? 90% of the time it's the significant other, the husband or wife, who did the murder, and it gets you thinking... what goes wrong in these people's lives that murder is the only option to a failing marriage? It makes a girl think; surely those men and women didn't go into marriage thinking, "Well, if it doesn't work out I'll just kill him/her!" 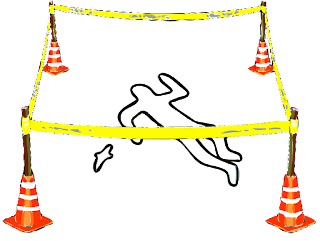 However, I'm an optimist. Despite all I watch, I believe in the goodness of most people, and I'm not cynical at all. I truly believe that 99% of people would risk life and limb to save another, even a stranger, and I think most police officers, despite all they witness, would agree.

Sometimes I feel bad about murder as entertainment; it's someone's life, after all. When I get down to that, it's horrible that someone's tragedy is on TV.  But you know, those shows often feature the family speaking about the victim, and I believe it helps them move on. They can tell the public about all the important things about their loved one, and not just how their life ended. I hope it's healing for them; I find myself saying a prayer for the living.

But about the dean... who killed him? Could it have been the wife? Or is it someone else in his life? The one person I know it wasn't is Jason Murphy. I would trust him with my life; he's that kind of special.

I'm wondering... if you watch true crime or read mysteries, does it affect how you think about other people? 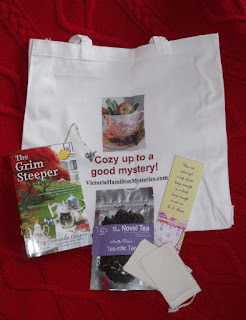 Comment here to enter to win a signed copy of The Grim Steeper, a bookmark, a book tote, and a packet of Auntie Rose's Tea-rrific Tea Blend! I'm also including a handcrafted one-of-a-kind Delft teapot bookmark!
So...
1 - Comment here.
2 - Canadian and US addresses welcome.
3 - Leave your email address in some format, (yourname (at) yourserver (dot) com) and your first name, please!
4 - Comment by midnight, today, February 21st!

About The Grim Steeper:
The national bestselling author of Shadow of a Spout invites readers back to the Finger Lakes town of Gracious Grove for more tea and murder...

Mid-October in the charming Finger Lakes town of Gracious Grove means it’s time for the annual Fall Fling Townwide Tea Party. The highlight of the festivities is a roaming tea-tasting, which includes a stop at Auntie Rose’s Victorian Tea House. Sophie Taylor would like to share her enjoyment of the event with her sort-of boyfriend, English teacher Jason Murphy, but Jason’s dean has accused him of falsifying grades to help an athlete at the local college. Steamed and stressed, Jason shows up the night of the party with bags under his eyes.

But the dean shows up under Sophie’s Japanese Maple later that night, murdered, and now Jason is suspected of far worse than fudging grade reports. It’s up to Sophie, her Nana, and their friends the Silver Spouts to pore over the clues to find out who really decided to teach the dean a lesson.