A Dark and Stormy Night

By Dr. Connor McNeil of the Lighthouse Library Series by Eva Gates

We had quite the storm last night here in the Outer Banks of North Carolina. Not quite a hurricane, but it was still mighty fierce. 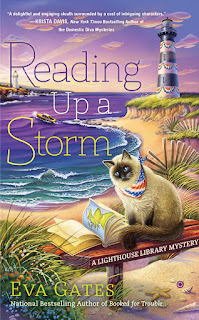 There’s something about a storm along the coast that always reminds me of my childhood. My dad and his father before him were fishermen, and the women in our family worked in the fish plant.  They were hard workers, who lead a hard life, but my folks were determined to give me a better life and they saved all they could to send me to college. Thanks to them, I’m now a dentist, as well as the mayor of our fine town.

Another thing that reminds me of my childhood is the book we’ve been reading at the Bodie Island Lighthouse Library Classic Novel Reading Club. Kidnapped by Robert Louis Stephenson. How I loved that book as a boy, as well as the movie it was based on. The one starring Michael Caine as the Jacobite hero Alan Breck.

A grand rollicking adventure of men at sea and on the run!

Unfortunately the story of Kidnapped is getting a bit too close to home right now to be comfortable. First we had those mysterious lights luring ships ashore in the storm, and then a murder in a small boat. And now Lucy has a gleam in her eye I don’t like one little bit. I fear she’s come up with an idea she’s taken directly from the pages of Kidnapped in an attempt to trap the killer.
That definitely can’t be good. Nothing, I can do about it but go along. I can’t let Lucy face a killer on her own.

Reading Up A Storm, the third Lighthouse Library mystery by Eva Gates releases on April 5th and is now available for pre-order at Amazon and at B&N as well as your favourite independent bookstore.

Would you like to win a signed ARC of By Book or By Crook, the first in the Lighthouse Library series?  The contest is ongoing at Facebook.  All you have to do is Like Vicki Delany & Eva Gates, and leave a comment for a chance to win.  Not on Facebook? Send us an email at Vicki@vickidelany.com with your entry and also to sign up for our quarterly newsletter.