My name is Jamie Dawes

Our guest today is from Barbara Ross's Maine Clambake Mysteries. Barb is giving away a signed copy of Fogged Inn to one commenter!

Hi. My name is Jamie Dawes. I live and work in Busman’s Harbor, Maine, the place where I grew 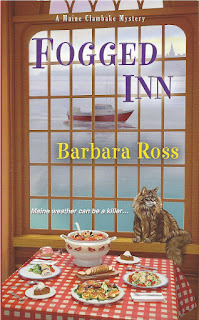 up. I still live in my parent’s house, in fact, even though I’m thirty. I’m the youngest of four kids, with a decade-long gap between me and the next one. My mother always calls me “the period at the end of the sentence,” and my dad always responds, “more like an exclamation point. Surprise!”

The older kids grew up, went off to school, and then moved to other states to make their livings and raise their families. I stayed to care for my parents. Not that I mind one bit, let me tell you. I love Busman’s Harbor, always have and always will. And, I was lucky enough to score a job as an officer with the Busman’s Harbor Police Department. In the off-season, there are only six sworn officers plus the chief, so they’re hard jobs to get.

What I didn’t anticipate, or really think through, was that it might get lonely. Most of the women I went to school with have either left town for opportunities elsewhere, or they’re coupled up, with little kids even. I’m an okay-looking guy with a good job. I didn’t have any trouble finding company during high school and college. Who knew it would be this hard?

Last spring, I thought all my problems in the companionship area might be solved when Julia Snowden moved back to Busman’s Harbor to rescue her family’s clambake business from bankruptcy. Julia grew up in the house next door. She was my first and best friend. We waited for the school bus together every day through elementary and middle school, and I worked summers in high school on Morrow Island where her family holds their clambakes.

I hoped there might be something there. I’ve always been a little in love with her. Her moving back was like a dream come true. But Julia was heads-down trying to save her family’s business. I didn’t want to distract her. I knew the stakes were high.

But then it became clear I’d missed my chance. Julia had somehow gotten attached to Chris Durand. He’s a shady guy, in my opinion, older than us, who skates along at the edge of the law. I didn’t like it one bit. One night, last summer, Julia and I were in a bar, discussing a murder case. One of her employees was a person of interest, but Julia was convinced he was innocent. We talked all night, just like old times. When the bar closed I walked her home and kissed her.

Giant mistake. Terrible mistake. It’s been awkward between us ever since. And the worst part, I can’t stop thinking about it, is that in my eagerness to find a relationship, I lost my friend. It makes me heartsick to even think about it.

Now we’re involved in a new case together. Julia’s landlord Gus found a dead guy in his walk-in refrigerator. The man had been in the restaurant Julia runs with Chris the night before he died. I saw him there with my own eyes. It was a foggy, icy night when I was dealing with my own problem, an accident blocking the main intersection that shut down the road in and out of town. No one knows who this guy is, why he died, or how he ended up in the walk-in. The state police major crimes unit is here working on it. I’m helping them with their inquiries and as a result I see Julia all the time.

I would give anything to take back that kiss, and to have my oldest friend back in my life in the same easy way it was when we were kids. I don’t know what’s going to happen. I don’t know if you can ever go back again. To your childhood. To the night before we kissed. I just know I miss my friend.

Readers, what do you think? Can friendship survive a failed attempt at romance? Can you go home again? Barb is giving away a signed copy of FOGGED INN to one lucky commenter! 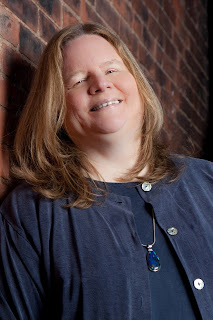 Barbara Ross is the author of the Maine Clambake Mysteries, Clammed Up, Boiled Over, Musseled Out and Fogged Inn. Clammed Up was nominated for an Agatha Award for Best Contemporary Novel and was a finalist for the Maine Literary Award for Crime Fiction. Barbara blogs with a wonderful group of Maine mystery authors at Maine Crime Writers and with a group of writers of New England-based cozy mysteries at Wicked Cozy Authors.