Florida Festival News and a #Giveaway 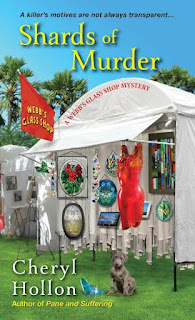 
The peak tourist season is nearly over down here in St. Petersburg, Florida. The Spring Break frenzy has gone and the students are back in class. The mad Canadians who swim in the Gulf of Mexico at bone-chilling temperatures have returned to shovel snow. The last big event of the season is the Spinnaker Art Festival.

In the past, I wasn’t much concerned with the internal workings of the festival. Then, I inherited the family-owned Webb’s Glass Shop. This year, I’m going to judge the glass category. That changes everything. No strolling through the aisles admiring the artist’s wares and creative display booths. No sampling from the beer truck for me. I need to have all my wits at full strength. I’m going to choose the winner of the glass category.

You bet I’m nervous. I’ve only been back in St. Pete for a few months and most of that time has been spent in getting used to being a small business owner. It was a shock and great honor to be appointed to take my late father’s role as judge. Dad was a pillar of strength in the art community and everyone trusted his judgement for choosing the best of the best emerging artist in the festival. I’m not so confident.

Anyway, come on downtown to the waterfront and enjoy the last major event of the season. Wave hello if you see me. I’ll be the one with the clipboard in my hand and a worried look on my face. I hope I choose the right artist.

Savannah’s adventures began in Pane and Suffering, the first book in the “Webb’s Glass Shop” mystery series, published by Kensington Books. The second book is Shards of Murder:

When a glass-making competition turns deadly, glass shop owner Savannah Webb must search for a window into a criminal’s mind. . .

As the new proprietor of Webb's Glass Shop, Savannah has been appointed to fill her late father's shoes as a judge for the Spinnaker Arts Festival, held in downtown St. Petersburg, Florida. With her innovative glass works, the clear winner is Megan Loyola, a student of Savannah's former mentor.
But when Megan doesn't show up to accept her $25,000 award, rumors start flying. And when Savannah discovers the woman's dead body on festival grounds, the police immediately suspect her of murder. To keep from appearing before a judge herself Savannah sorts through the broken pieces of glass scattered around the victim for clues as to who took this killer competition too far. . .
You may pre-order book #3, Cracked to Death, due for publication on June 28, 2016.

GIVEAWAY: Leave a comment for the chance to win a pair of fused glass earrings created by Cheryl and her husband George in their small studio behind the house. 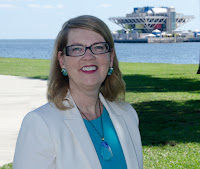 Cheryl Hollon writes full time after she left an engineering career designing and building military flight simulators in amazing countries such as England, Wales, Australia, Singapore, Taiwan and India. Fulfilling the dream of a lifetime, she combines her love of writing with a passion for creating glass art. In the small glass studio behind the house, Cheryl and her husband George design, create, and produce fused glass, stained glass, etched glass and painted glass artworks.