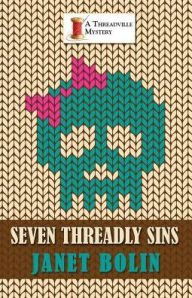 by Dora Battersby from the Threadville Mysteries by Janet Bolin

To me, the term "knitted brow" conjures up rather painful images involving foreheads and knitting needles.

Then I saw the cover of the large print version of SEVEN THREADLY SINS by Janet Bolin, and I had to read the book.

Imagine my shock to discover that SEVEN THREADLY SINS features me, my daughter, and our friends in our little village known as Threadville. It tells about how we found the clues and evidence and put them together to finger the murderer of that rather horrible man, Antonio, who called himself a fashion designer and accused my daughter and friends of committing "threadly" sins. Of all the nerve! And then, speaking of nerve, since I was near the appalling man, and I had my arm upraised when he collapsed, the police actually considered that I might have hit him. I assure you that I did not touch him. Shh--don't tell anyone, but I would have smacked him, and for a very good reason, if he hadn't fallen down before my hand could connect. 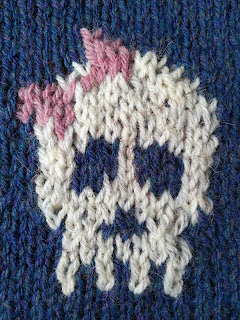 I spin and weave, but I do sometimes pick up knitting needles, and when I saw the covers of the two books that I'm in (I didn't show up in Threadville until after three mystries had been solved), my first thought was that the cover artist had cleverly provided me with knitting patterns.

I couldn't resist the skull with the bow. Yes, it is a little creepy... 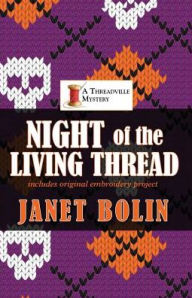 The Argyle pattern where skulls replace some of the diamonds makes me laugh, and I suppose I might try that one, too. Wouldn't socks be amusing?

Do you knit, or merely knit your brow? If you knit, do you ever find patterns in unlikely places, like on the covers of books?

The Threadville Mysteries are available as paperbacks, e-books, and in large print. Find booksellers here.