When History Gets Personal

Nell Pratt has really put her foot in it this time. Okay, it’s not her fault. She was doing her job. She found out that through some clerk’s stupid mistake years ago, the Society (that’s the Pennsylvania Antiquarian Society, where I’ve been on the board forever) still owns a piece of property in a part of Philadelphia where you wouldn’t want to send your worst enemy. Of course she had to go see it, and that’s when bullets started flying and somebody ended up dead. Not Nell, thank goodness—the Society needs her.

Almost getting killed on the job would kind of shake anybody up, right? But Nell doesn’t give up easily, and instead of crawling into her office and hiding, she’s trying to do something about the problems that she saw up close and personal.

I love Philadelphia. My family’s been part of this city since seventeen-whatever, and I live here now, not far from the house where my father grew up. It’s got a lot of history, and some great museums and other sites that the tourists eat up. But you’d have to be blind not to see the changes that have happened even during my lifetime. Yes, there are slums—bad ones. Some parts of town have been nicknamed “Killadelphia.” To someone like me, that hurts. 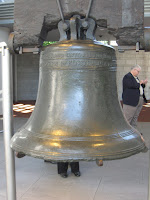 It hurts Nell, too, and now it’s personal. So she’s looking for a way to make things better. It’s a good thing she has ways to do it, starting with documents for every era of the city, and photographs since cameras were invented. It can make you sad to look at them now, because sometimes they show how far downhill the city has gone. But it should also show what a city neighborhood could and should be. The problem is, it takes money and time and energy to make good changes happen, but Nell’s got some of those. And she’s got me to help.

Cities these days face a lot of problems. I think Nell and I have some good ideas for Philadelphia, but we’ll have to wait and see if we can make them work. I really hope we can.

What's your favorite city? What would you like to see improved there?


Dead End Street (Museum Mystery #7) will be released on June 7th. It's available for pre-order at Amazon and Barnes and Noble.