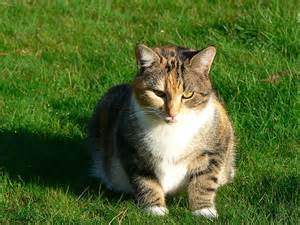 Dear Currently Comfortable Felines,
I am writing this letter as a warning, of sorts, to those of you who think your life can’t change in the blink of an eye.
For a while, I had quite the life. My human, Gertrude Redenbacher, spoiled me rotten. If she had hot chocolate, I got a little of the whipped cream. If she had a ham sandwich, I a little piece. When she sat to read or knit or nap (which she did a lot), I slept on her lap for hours. And nine times out of ten there was a warm wooly blanket and a sun spot involved, so my life was rather golden, you might say. 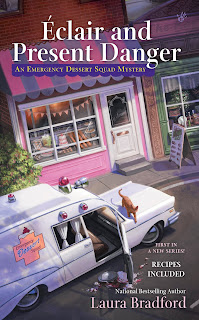 Then one day, Gertrude went away. Someone said she crossed the human equivalent to the rainbow bridge. I can’t really say one way or the other, I just know my lap is missing.
I wasn’t too sure what was going to become of me until I was handed off to one of Gertie’s neighbors along with a set of keys for that old ambulance Gertie’s late husband was always tinkering with.
I tried to protest (okay, I hissed a few times) the hand off, but no one listened, least of all Gertie’s attorney who said something about a will and last wishes.
So now I’m living with Winnie. She’s thirty four, which, translated, means she rarely sits (and, therefore has no lap), doesn’t seem to get the concept of table scraps, has yet to figure out my affinity for whipped cream, and she murdered two goldfish that were left in her care.
That’s right. She murdered two goldfish.
And this is who Gertie left me with?
Are you kidding me?

Traumatized and Seriously Ticked Off (aka Lovey)

***
Bio:
As a child, Laura Bradford fell in love with writing over a stack of blank paper, a box of crayons, and a freshly sharpened number two pencil. From that moment forward, she never wanted to do or be anything else. Today, Laura is the national bestselling author of several mystery series, including the Emergency Dessert Squad Mysteries, the Amish Mysteries, the Jenkins & Burns Mysteries, the Southern Sewing Circle Mysteries written as Elizabeth Lynn Casey, and the upcoming Tobi Tobias Mystery Series. She is a former Agatha Award nominee, and the recipient of an RT Reviewer’s Choice Award in romance. A graduate of Xavier University in Cincinnati, Ohio, Laura enjoys making memories with her family, baking, and being an advocate for those living with Multiple Sclerosis.
For more information, visit: www.laurabradford.com or, for day to day stuff, you can find Laura on Facebook: https://www.facebook.com/laurabradfordauthor/  and occasionally on Twitter @bradfordauthor