Not Easy Being Me 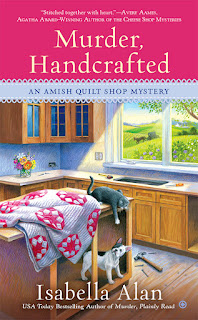 by Oliver the Frenchie from Murder, Handcrafted

It’s not easy being me. Yes, I borrowed that quote from Kermit the Frog. Well, I sort off did. I changed it a little. In any case, it doesn’t make it any less true. It’s not easy being me. Me being an adorable—I’m not bragging everyone says it—French bull dog and best friend to Angie Braddock, the owner of Running Stitch, which is an Amish quilt shop in Holmes County, Ohio. She’s not Amish though. Yes, I know that’s a little confusing. You should read all the biographies that Isabella Alan has written about her to find out how she ended up where she is now. It’s a crazy story, and I was there every step of the way. Angie’s first biography is Murder, Plain and Simple, and now, the fifth, Murder, Handcrafted, is coming out. I appear in every last one of the books. I am Angie’s right-hand pooch. 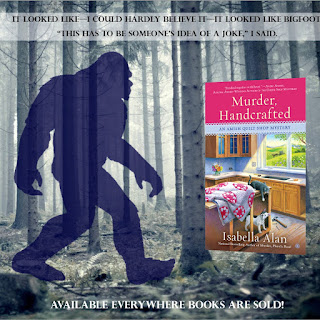 In Murder, Handcrafted, we have big problems. Bigger than our normal problem, I should say. Sure, there’s a murder. There’s always a murder, but now, we are dealing with Bigfoot! Nope, you didn’t read that wrong. Bigfoot has been spotted all over Holmes County, and now he’s mixed up in a murder. When there is a murder in the county, you know Angie will stick her nose in it. This time, she really gets involved because the murder takes place in her parents' backyard. Poor Sheriff Mitchell. He loves Angie so much, but I’m really feeling for him over this murder case. He has to deal with Angie and me snooping about, Angie’s parents, and Bigfoot. This might be the case the drives that man straight to retirement.
All I know is that even in the face of danger, I will be at Angie’s side ready to help her any way that I can. I’ll go paw to paw with Bigfoot for her. It’s a good thing Bigfoot doesn’t have wings because that would be another story. Birds are terrifying. Anything with wings is terrifying. He doesn’t have wings, does he?


**************************
Amanda Flower, a Agatha Award-winning mystery author, started her writing career in elementary school when she read a story she wrote to her sixth grade class and had the class in stitches with her description of being stuck on the top of a Ferris wheel. She knew at that moment she’d found her calling of making people laugh with her words. Amanda is a librarian in Northeast Ohio. She also writes as USA Today Bestselling Author Isabella Alan. Her next release it MURDER, HANDCRAFTED release June 7, 2016. www.amandaflower.com