One last fling with Audrey Bloom—with a giveaway! 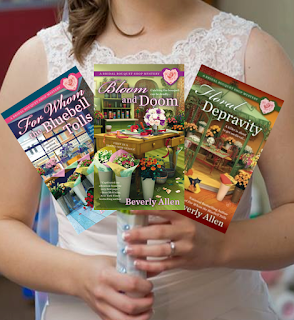 As a florist, I have to admit, I’m not always that keen on the tradition of flinging a bouquet--especially one I might have spent hours designing--into the air with such gleeful abandon. I guess it was a compromise that went back to the middle ages, when wedding guests actually tried to rip off bits of the bride’s clothing for luck. Yeah, given the choice, I’d be more willing to part with my flowers than my dress.

But I always wince a little, especially when a full bouquet goes flying into the air. For one thing, I worry about liability. Some are heavy and can have sharp elements. I always recommend a smaller bouquet, just for tossing. I chose to break apart my hand-tied bouquet and gave out all the flowers to the young girls present. Even a little violet for baby Vi. It was so sweet and I have great pictures.
But the flowers for my own wedding? Well, I did have a bouquet in mind, back in the day. But it hardly seemed right to use it, especially since there was a change in groom from when I thought Brad and I had a future together. But many of the elements stayed the same.

White roses for innocence. These took on new meaning. The last few years I’ve learned a thing or two about innocence and about guilt, and about the sometimes thin divide that separates them. I’ve come to realize villains generally aren’t hunchbacks with handlebar mustaches, with pronounced evil laughs as they tie victims to railroad tracks. They’re real people, who, for whatever reason, make very bad decisions. Innocence is something that has to be carefully maintained, so that the evil of this world doesn’t color us and make us jaded, cynical, or bitter. Yes, I kept the white roses.

I did replace the original lavender roses, which represented love at first sight. Instead, I chose multi-
colored zinnias, which speak of remembering absent friends. As Kermit the Frog (channeling Dickens) said, “Life is made up of meeting and partings. That is the way of it.” I was happy to see so many friends, if only for a little while, make it to the ceremony. Even my mother and father seemed to get along for a few hours.

I also kept the Queen Anne’s lace, since it reminded me so much of my beloved Grandma Mae. And the ivy, which symbolizes friendship and fidelity.

I did want something to symbolize the groom, who stepped into my life and quickly became my cohort, my sidekick, my friend, and the love of my life. I agonized over the choice for weeks, and then surprised myself by picking stephanotis, that almost clichéd symbol of marital bliss. But you know what? I couldn’t have been happier with my choice, either of flowers or of groom.

I’d love to tell you more, about the wedding and about our new life together. Oh, the adventures we could have had! But time has come for one of those partings…

Author’s note: The Bridal Bouquet Shop series from Berkley has ended, and while Audrey and her friends might pop up from time to time here on Killer Characters, starting next month, I’d like to begin to introduce you to some new friends from my upcoming series, The Vintage Toyshop Mysteries, which debuts in October from Crooked Lane. Meetings and partings. Or in this case, partings and meetings. Yes, that is the way of it.

Audrey Bloom’s Last Fling Giveaway: For a chance to win one of these three books (BLOOM AND DOOM, FOR WHOM THE BLUEBELL TOLLS, and FLORAL DEPRAVITY), tell me your favorite flower and which book you’d like to receive if you win, if you have a preference. Entries will be accepted, on this post only, until midnight of July 5th, after which winners will be chosen randomly from the comments and notified.