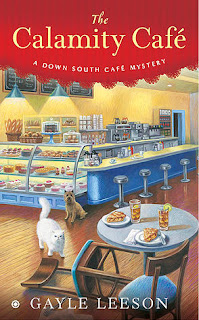 by Jackie Fonseca of The Calamity Cafe by Gayle Leeson

I’ve got a little something stuck in my craw, but I’m going to do what I can to fix it. And I want y’all to help me. It’s about the word Appalachian. It is NOT pronounced Appalaychian. It’s Appalachian. Short a like in apple.


I tend to use that word as a measuring stick of how well TV and movie writers “know their southern.” For instance, it was like fingernails on a chalkboard when I was watching Justified one night and heard (I believe) Boyd Crowder say Appalaychian. “No, Boyd, NO!” Those writers did and actors did so well with dialect and then…that word. When watching Big Stone Gap, I held my breath at the “Appa—” and released it with a relieved sigh at the “—lachian.” I have to say, though, that I was a little disturbed at the way the actors pronounced the word married. It sounded like murried. I thought, “We don’t say married like that, do we? Do we?” And, no, I don’t think we do. Of course, some Appalachians might—there are several different dialects.

I did a little research and learned that the Appalachian region has its own language.  Linguists call it "Appalachian English."  The Scots-Irish settled the entire region known as Appalachia (all of West Virginia and portions of Virginia, Pennsylvania, North Carolina, Kentucky, Tennessee and Georgia) in the mid-1700's.  At the time, physical boundaries kept modernization out.  Then in the 1940's, the Great Smoky Mountains National Park was created; and that brought tourists to the area.  By the 1950's, highways and telephones were more prevalent throughout Appalachia, bringing the modern world another step closer to its rural inhabitants.

Now, I don't want you to think we in Appalachia are a bunch of snobs.  We realize that the same immigrants who settled here settled land elsewhere, but the linguists tell us that our speech patterns will not be found in any other dialect to the extent that they are in Appalachia.

This little foray into my Appalachian heritage has given me new insight.  We might chop off some of our "-ings"; we might "reckon" rather than "guess" sometimes; and we might have places with such outlandish names as "Lick Skillet," "Frog Holler" and "Sugar Loaf," but we have a rich history.  We know where we came from and, for the most part, where we're going.  And if anyone thinks we're a bunch of ignorant hillbillies, then you ought to come and get to know us a little better.  If you stay long enough, we might be able to teach you how to talk right.

Please join Gayle on her Great Escapes Virtual Book Tour for a chance to win books and other prizes, including a $50 Amazon gift card!