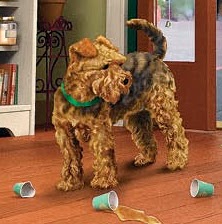 by Arf the Dog, from the Seattle Spice Shop Mysteries by Leslie Budewitz

The Killer Characters' Summer Reading fun continues! Leave a comment below for a chance to win a copy of ASSAULT & PEPPER or GUILTY AS CINNAMON -- winner's choice!

And see the details below on a summer price cut!

Good morning, gentle readers. Many of you have asked, so I will get the introductions out of the way first. I am an Airedale, the King of Terriers. (There may be a touch of the smaller Welsh Terrier in me as well - they, too, are a most excellent breed.) The humans seem to think I'm about five years old, in their terms; age does not matter to me. I came to live with Pepper last fall, when Sam---the street name of the man known officially as Winfield Robinson III---decided to leave Seattle and return to Memphis, where his humans are. I am not familiar with Memphis, but I believe I would have enjoyed the opportunity to explore its streets and smells---I hear they serve very fine barbecue. But Sam thought the long bus ride would be too much for me. I am not sure why---I have always gotten along well with greyhounds. Sam knew Pepper to be a generous and loyal friend, and she does indeed have those admirable qualities. She is a delightful companion who values my presence in her life, and rubs my ears. She is also well-acquainted with the butchers in the Pike Place Market, where we spend much of our time.

On a typical day, I rise early and take Pepper for a walk. She is occasionally a little grouchy in the mornings, so I make sure she has her coffee, and that improves her mood tremendously. Most days, we go straight to the Market, a few blocks from our loft in a downtown Seattle warehouse. We greet the farmers, vendors, craftspeople, and merchants as they set up their stalls and stores for the day. Pepper owns the Seattle Spice Shop, and we prepare to open it. Then I keep an eye on things while she works. Occasionally, trouble arises and she is called upon to investigate. I often assist in her inquiries---she often refers to me as Mr. Ambassador. On occasion, she leaves me in the shop to assist her employees, which I do from my bed behind the front counter. (I have heard rumors that dogs are not officially allowed in the Market, but the Golden Retriever who supervises the Market managers' office tells me not to worry.)

The Pike Place Market is a glorious place, full of crooks and crannies, sights and smells, and many friendly people. And a few bad apples, but we know what to do with them, don't we?

As I say, I came to live with Miss Pepper in ASSAULT AND PEPPER. In GUILTY AS CINNAMON (Book Two), I get to use my investigative talents to help Pepper identify and catch a very bad man. In KILLING THYME (Book Three, coming October 4, 2016), Pepper and I don capes and fly through the city---no, wait, that was last night's dream. We investigate a suspicious death linked to Pepper's childhood home, uncovering decades-old secrets that put her family and dearest friends in danger. Pepper once again proves herself smart, loyal, and courageous---and I her most faithful companion.

Leave a comment by midnight, Friday, July 29, with your email address (e.g., leslie AT lesliebudewitz DOT com), for a chance to win a copy of ASSAULT & PEPPER or GUILTY AS CINNAMON -- winner's choice! US and Canada addresses only.

And the SUMMER SPICE SALE continues! The e-book of ASSAULT AND PEPPER is now 1.99, through BookBub and all online retailers, while the paperback of GUILTY AS CINNAMON is reduced to 7.19 through the online retailers. But hurry -- sale prices end this Sunday!

Leslie Budewitz is the national best-selling author of the Seattle Spice Shop Mysteries and the Food Lovers Village Mysteries, set in northwest Montana. She is the only author to win Agatha Awards for both fiction—the 2013 Agatha Award for Best First Novel, for DEATH AL DENTE—and nonfiction—the 2011 Agatha Award for Best Nonfiction for BOOKS, CROOKS &
COUNSELORS: HOW TO WRITE ACCURATELY ABOUT CRIMINAL LAW & COURTROOM PROCEDURE. 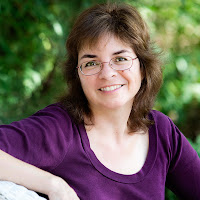 For more tales of life in the wilds of northwest Montana, and bonus recipes, visit her website and subscribe to her newsletter, or join the fun on Facebook.