by Faulkner the Crow from Crime and Poetry

Charming Books in my home, and it’s my job to watch over it and its owner Grandma Daisy. I owe a lot to Grandma Daisy. She saved my life. You see, I had a bit of mid-air accident when I was young crow. I was no more than a hatchling when it happened. I had just learned to fly and was dreaming about all the adventures that I would have now that I was out of the nest, then I flew into a tree. Please, let’s keep this between us. No bird wants to admit that he flew into a tree. It’s beyond embarrassing, and it hurt. I broke my wing.

The tree that I flew into was in the backyard of Charming Books, a small bookstore in the adorable village of Cascade Springs, New York. I managed to hop to the back door, and that’s were Grandma Daisy found me. Without a second thought, she picked me up and nursed me back to health. She was kind and caring and showed me all the books in her shop. She also told me about her magic the shop held and how the birch tree that grew in the middle of the shop was involved in it all. She said it was our secret to keep. 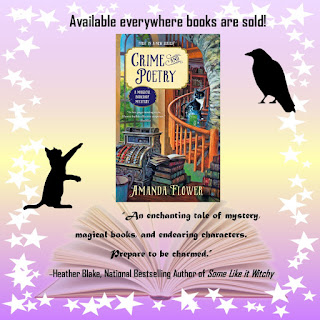 In a few months, I was better. I could fly again, and Grandma Daisy said that I could leave. I wasn’t leaving; I had found my place and my home. And seriously, what crow in his right mind would leave a magical bookshop where the books actually communicate with the shop owner? All was well in my world until Grandma Daisy’s granddaughter, Violet, showed up. Violet is fine… most of the time, but the problem is the cat. You see, not long after Violet arrived Benedict Raisin, Grandma Daisy’s beau, died (he was killed!), and he had a cat, Emerson. Violet adopted the mischievous tuxedo cat, and now he lives in Charming Books with me. This is not amusing. It would be fine if Emerson understood the pecking order around here and that I’m the boss, but he just doesn’t get it. Emerson thinks he is the Charming Books’ mascot. How wrong he is. I was here first. I will just have to think of a way to show Emerson that I’m in charge…

**************************
Amanda Flower, a Agatha Award-winning mystery author, started her writing career in elementary school when she read a story she wrote to her sixth grade class and had the class in stitches with her description of being stuck on the top of a Ferris wheel. She knew at that moment she’d found her calling of making people laugh with her words. Amanda is a librarian in Northeast Ohio. She also writes as USA Today Bestselling Author Isabella Alan. Her next release it MURDER, HANDCRAFTED release June 7, 2016. www.amandaflower.com