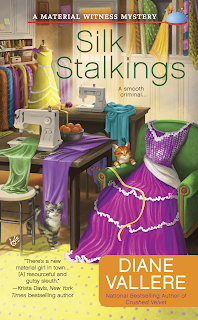 The time has come for San Ladrón, California’s annual Miss Tangorli beauty pageant, and Poly has agreed to use Material Girl’s inventory of shimmery silks to create embellished gowns fit for a crown. But when millionaire Harvey Halliwell—the man who revived the city’s citrus trade with his imported tangorli tree—is found dead days before the pageant contestants are announced, something sour takes over the town. To make matters worse, her friend, mechanic Charlie Brooks, is soon caught up in the crime, having been seen in the company of the case’s prime suspect. Now Poly’s on a mission to squeeze out the truth. But as she searches for a pattern, the killer seems intent on cutting up the evidence... 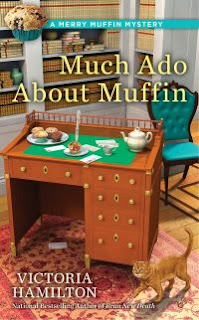 In this fresh mystery from the national bestselling author of Death of an English Muffin, baker Merry Wynter comes to the aid of an innocent woman accused of murder.

Opera singer Roma Toscano may have a crippling case of stage fright, but she certainly is stirring up drama in Autumn Vale, New York, as she prepares for an upcoming performance at Merry’s Wynter Castle. With her flamboyant style and flirtatious personality, Roma attracts fans as well as critics, including the town’s postmistress—and Merry’s bitter foe—Minnie Urquhart.

But Roma and Minnie’s heated rivalry goes cold after Merry discovers Minnie dead at the post office. While every clue seems to be another ingredient in the investigation of Roma, Merry thinks the case is half-baked, and she’s eager to get her mitts on the real killer... 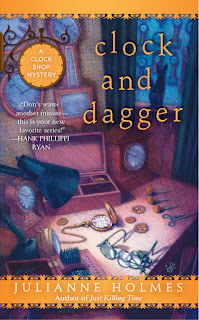 Ruth has three days to pull off four events—including the grand reopening of Cog & Sprocket, the clock shop she inherited from her grandfather—so she doesn’t have time for Beckett Green’s nonsense. The competitive owner of a new bookstore, Green seems determined to put other businesses out of business by also carrying their specialty items. He’s trying to steal Ruth’s new watchmaker, Mark Pine, not to mention block her plans to renovate the town clock tower. Ruth is already all wound up when she’s alarmed to discover Mark’s dead body. As the denizens of Orchard each chime in as to who they think the murderer is, Ruth needs to watch her back as she investigates on her own. Despite the danger, Ruth won’t stop until the killer is behind bars and serving time... 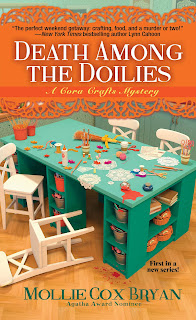 For thirty-something blogger Cora Chevalier, small-town Indigo Gap, North Carolina, seems like the perfect place to reinvent her life. Shedding a stressful past as a counselor for a women’s shelter, Cora is pouring all her talents—and most of her savings—into a craft retreat business, with help from close pal and resident potter Jane Starr. Between transforming her Victorian estate into a crafter’s paradise and babysitting Jane’s daughter, the new entrepreneur has no time for distractions. Especially rumors about the murder of a local school librarian . . .But when Jane’s fingerprints match those found at the grisly crime scene, Cora not only worries about her friend, but her own reputation. With angry townsfolk eager for justice and both Jane’s innocence and the retreat at risk, she must rely on her creative chops to unlace the truth behind the beloved librarian’s disturbing demise. Because if the killer’s patterns aren’t pinned, Cora’s handiwork could end up in stitches . . .

Cozy Up To Summer Giveaway!

Happy August, all! We're about halfway through our Cozy Up To Summer month of giveaways, and to celebrate the August new releases we have a super giveaway planned. Win one of these three book prize packages by leaving a comment here naming one of the above new releases in your comment! US and Canadian addresses only, please!

So... please leave your name, and your email address (yourname (at) yourserver (dot) com, if you like, to avoid the spambots picking it up) by 9 am, August 2nd.

*PLEASE NOTE... packages will be awarded as shown, no substitutions, and in the order your comment is drawn by random numerical draw.

Prize Package #2 - Books: Toasting Up Trouble, by Linda Wiken; To Catch A Treat, by Linda O.
Johnson; Much Ado About Muffin by Victoria Hamilton; Read to Death by Terrie Farley Moran.

Prize Package #3 - Books: Fixin' To Die, by Tonya Kappes; A Clue in the Stew, by Connie Archer;
Knot The Usual Suspects by Molly MacRae; The Grim Steeper, by Amanda Cooper.