Who Else Thinks I’m Handsome?

by Quincy
from the FAT CAT series by Janet Cantrell 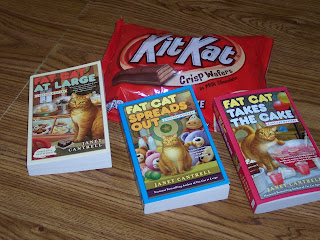 When all three of the covers are laid out like this, I’m sure everyone can see for themselves. I’m a handsome devil of a cat!

In the first book, when I’m AT LARGE, I was a bit insulted at first. I thought it was a reference to my tubbiness. But then I realized it only means that I’m clever and can get away whenever I want to.

Then they used the words SPREADS OUT in the second book. Was my writer saying I was putting on weight? Anyway, why would that matter? It just means there’s more of me to love, to pet, and to feed.

Finally, I TAKE THE CAKE in the third book. I don’t really eat cake, but I do take the cake, in the sense that I’m the cat’s meow, if you know what I mean.

It’s me, Janet, the author. I’m giving away signed copies of any one or two (or all three if you don’t have them) Fat Cat books this month, plus a bag of goodies to match the theme. Please leave a comment telling me which book(s) you want, and I’ll pick a winner at the end of Saturday, the 6th.