A Game from Liz McCall of the Vintage Toyshop Mysteries

Liz McCall here. I self-identify as a board game junkie. We have quite a selection of vintage board games at the shop. But today I have a new game for you! It's kind of a cross between a logic puzzle and the board game Clue. And the suspect are eight authors from the Killer Character blog! 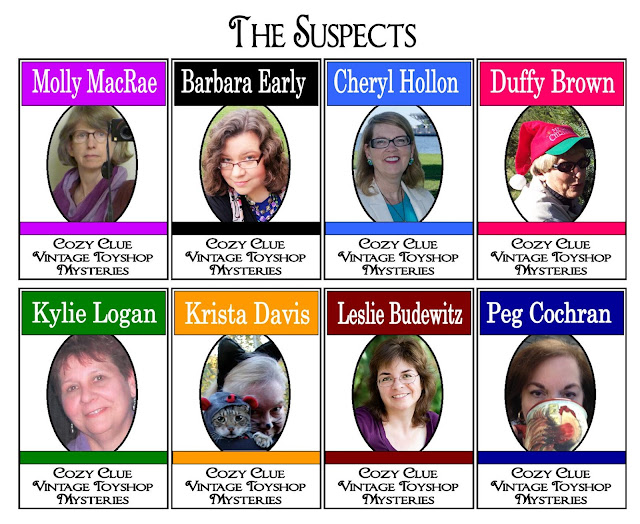 UPDATE: THE WINNERS HAVE BEEN CHOSEN, BUT YOU CAN PLAY JUST FOR FUN, IF YOU'D LIKE. WHEN YOU'RE DONE SUBMITTING YOUR ANSWERS, THE FORM WILL LET YOU KNOW HOW YOU DID.

Here's how it works:

In addition, every player can make ONE free guess (suspect, weapon, and location) in the comments below at any time in the game. Leave an email in a safe format (ie. MyName AT myhost DOT com), and I'll email back the name of one of your items that's wrong, if any. You only get one guess, so use it wisely!

The weapons are:
The possible locations are:
When you think you've figured it out--or have eliminated enough possibilities that you'd like to "take a stab" at it--you can make your final accusation at this Google form. If for some freak techno reason you cannot access the form, you may email me at Barb AT BarbaraEarly DOT com, using the heading "final accusation" and be sure to tell me the suspect, weapon, and location. DO NOT post your final accusations in the comments.

The first person to make a correct accusation will win a vintage toyshop totebag, a signed, hardcover copy of Death of a Toy Soldier, and signed copies of Cheryl Hollon's Pane and Suffering, Leslie Budewitz's Killing Thyme, and Krista Davis's The Diva Serves High Tea. (Cat not included.) 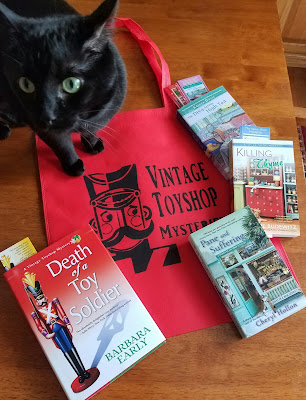 Five runners up will be chosen randomly from correct responses, and will each receive a Scrabble tile necklace.

The prizes as shown are limited to the United States. INTERNATIONAL PLAYERS may enter, but if they win, the prize will be DEATH OF A TOY SOLDIER only. (You don't want to know how much it costs to mail prizes across the globe!)

You may find this worksheet helpful.

Here are the CLUES:

Leslie Budewitz didn't kill anyone with a soldering iron or in a glass shop.
The only weapons that could be used in the B & B are the book and the lawn dart.
Neither Molly MacRae nor Duffy Brown killed anyone with a flax hackle.
If Peg Cochran killed anyone, it was in the farm store.


Duffy Brown didn't kill anyone with a soldering iron or in the yarn shop.
If an antique book was used, it was in the spice shop.
The murder didn't take place in a vintage toyshop.
If the killer used a lawn dart, it was in the bike shop.

Cheryl Hollon didn't kill anyone with a soldering iron.
If the killer used an athame, it was in a yarn shop.
Neither Molly MacRae nor Leslie Budewitz used a halbard.
Neither Duffy Brown nor Cheryl Hollon killed anyone with an antique book.

Remember, you make make ONE free guess in the comments below (include your email) at any time in the day, you may make one accusation here, and be sure to check back for more cozy clues! 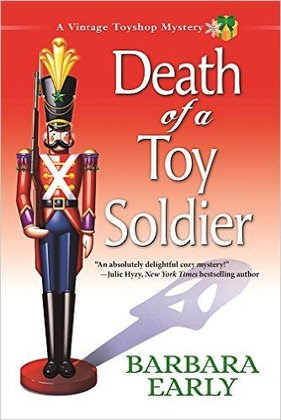 Death of a Toy Soldier, the first of the new Vintage Toyshop Mysteries, releases on October 11th from Crooked Lane.


You can follow Barbara Early on Facebook to learn about more games and prizes in the twelve days leading up to the release!


You can find Death of a Toy Soldier on Amazon, Barnes and Noble, and through many other fine retailers.
Submitted by Barbara Early