Bad to the Bone

I stood at the end of the rows of lettuce and leaned on my shovel.  Running Love Blossom Farm is a lot of work, but I love it.  I love the feel of the earth between my fingers, the faint smell of manure that permeates the air, the smudge of red in the distance that is our old barn.


But sometimes I do get tired!


I looked up, startled, at the sound of Jake’s voice.  Jake is my next door neighbor.  He rents his pasture from me and provides me with plenty of fresh milk.


Dear Reader, Jake looks more like a cowboy than a farmer in his plaid shirt with the sleeves rolled up and his worn jeans and cowboy boots.


Jake made short work of digging the hole I needed.  He was almost finished when the shovel struck something that definitely wasn’t dirt.  He got down on his hands and knees and pushed the loose soil aside.


“It’s a bone,” he said, getting to his feet.  He turned to me.  “Do you think someone is buried here? This land must have been inhabited by the Indians at one time.”


He picked up the shovel again and carefully began to dig deeper but there were no more bones to be discovered.


“Should we call the police?” he said.


“Better safe than sorry,” he said as he pulled his cell phone from his pocket.


He hadn’t even begun to punch in the number when Jenkins and Bitsy came bounding over to see what all the fuss was about.  Jenkins is a short and stout Westhighland white terrier, and despite her name, Bitsy is a considerably larger mastiff.


Dear Reader, I should have suspected this right away!


I looked at the two dogs and the proverbial light bulb went on.  I began to laugh.


Jake pulled the phone away from his ear.  “What’s so funny.”


I pointed at the bone in his hand.  By now I was laughing so hard I could barely talk.


“The bone…it’s a soup bone.  Jenkins must have buried it.  He can dig a hole faster than a Bobcat.”


Jake looked sheepish as he put his phone back in his pocket.


“I guess I jumped to the wrong conclusion—especially given how many murders you’ve been involved in.”


“I’m just glad this isn’t another one,” I said as I scratched the dogs behind the ears.  “I’ve had enough corpses for a lifetime.”

To win a copy of No Farm, No Foul, first in my Farmer's Daughter series, leave me a comment below--have your pets gotten up to anything really funny? 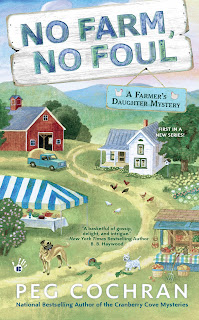