I can’t believe it’s been a year since I stopped by here—it was right around this time last year, right before Halloween. I’d just moved into Ned Newhall’s house, when my house-sit ran out and I didn’t have the money for a place of my own. Please don’t think it’s about pity—Ned and I have a wonderful relationship, made even more special by the kind of unusual link we share: we both see our dead ancestors.

I know, that sounds weird. We don’t talk to them, and they don’t see us, but they keep showing up unexpectedly. I’ve been working on filling in my family tree for a while now, but I know I have a long way to go—and sometimes those ancestors show up before I even identify them!

I love living with Ned, in his classic Victorian house, but to tell the truth, I need more to keep me busy than replacing peeling wallpaper. I’m not sure I can find a job (because of some complications with leaving my last one), so Ned and I are trying to figure out how to do learn more about our shared “paranormal phenomenon.” I’m doing the research side, in books and online, and he’s doing the science side, more or less.

You’d be surprised how popular the whole Spiritualism thing has been in Massachusetts, for almost two centuries. It kind of comes in waves, going underground for a while then coming into the open again. Like now:jJust this month I’ve been to a psychic fair, with a whole batch of mediums, and a haunted house tour (just to see if I could find a ghost who was not related to me, but I didn’t). But along the way Ned and I have found a couple of people who have some sort of psychic connections to us that we didn’t expect. Last but not least, Ned set up some kind of super brain scan through a friend of his, with some rather unexpected results—but you’ll hear more about that later.

Now Halloween is coming, and this is the first year I’ve really been truly aware of all the spirits around us. It’s been a major holiday for a very long time in certain cultures, with a lot of myths attached. The ancient Celts believed that the day marked the beginning of winter and the start of a new year. They also thought that it was the time when spirits of the dead moved on to their next life—the point where the world of the living and the spirit world were closest, and the spirits returned—briefly—to our world.

It should be interesting to see who comes trick-or-treating this year! 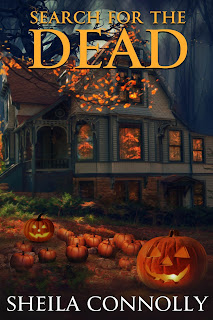 Book news: There will be a new book in the Relatively Dead series any minute now. We (my editor and I) think the title is Searching for the Dead. This may or may not be the cover. But it does take place at Halloween! You’ll be the first to know when I have a date for it.