By Nancy Reed,  a featured character in the Clock Shop Mystery Series by Julianne Holmes

These two Christmas letters arrived in the mail this morning. One is from my former sorority sister, Patricia Connor from Jamestown, Rhode Island. The other is from my friend Jacqueline Snowden who owns the Snowden Family Clambake in Busman’s Harbor, Maine, where we go in the summer. They are both having such crazy years! Or, I should say, their daughters are.

Giveaway: Leave a comment on the blog to be entered to win the latest book about their adventures: Custom Baked Murder, A Pawsitively Organic Pet Food Mystery, or Iced Under, A Maine Clambake Mystery. 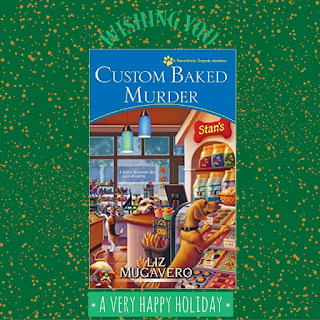 Season’s greetings from the Connor family!

As many of you know, I would normally co-host a holiday party with my daughter Caitlyn at my Jamestown estate, but my life has changed quite drastically over the past year, so I’m writing this letter instead to tell you all about what’s going on in our lives. Let me explain.

You may have heard that I’m engaged to a lovely man that I knew long ago, Tony Falco. He’s mayor of a small town called Frog Ledge, Connecticut. I’m sure none of you have heard of it. I hadn’t heard of it either, until my headstrong older daughter Kristan moved there last year. Quite frankly, I’d thought she’d lost her mind. But she’d left her respectable job and seemed to be floundering, so she moved herself to this godforsaken place. When I investigated the town, I discovered that Tony was running for mayor. The rest, as they say, is history.

Tony and I are looking forward to a Christmas wedding. Unfortunately, we have to live in Frog Ledge. I only plan to be there part-time. Aside from being small, it seems to have a larger homicide rate than Providence. And my daughter continually finds herself in the middle of these problems. I have no idea how she does it. When she’s not finding bodies and helping solve murders, she’s opened her own business. I must admit at first I thought it was silly - who cooks gourmet food for animals, for goodness sakes? - but she’s become quite the entrepreneur. She’s even opening her own shop soon, after working out of her house for a year. I’m an investor, of course.

Kristan has also got herself a boyfriend in Frog Ledge, who I must say is very easy to look at. Admittedly, he’s a lovely man despite the fact that he owns a pub. It seems to be a classy enough place. He moved in with Kristan recently, so perhaps there will be wedding bells for them in the future.

My other daughter, Caitlyn, is having a difficult time. She’s in the middle of a divorce from Michael. It’s quite nasty, actually. I won’t comment on whose fault it is. Anyway, she’s not handling it very well. My granddaughter Evangeline seems to be adjusting, fortunately. She’s a darling girl. A bit headstrong like her aunt, actually. And she loves animals like Kristan as well.

That’s the important news of the year. I’m excited - and a little nervous - about what the new year holds!

Please keep your eyes out for Tony’s and my wedding invitation, and we wish you a wonderful holiday season. 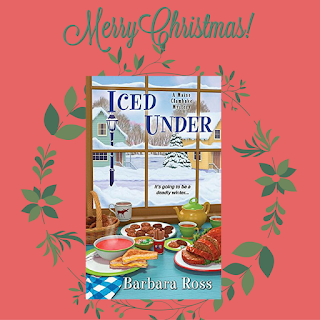 Here is it the bane of our existence, the annual “Christmas Letter,” wherein we tell our friends about our fabulous lives, great vacations, what our overachieving children are doing, and how our lives are so much better than theirs…

This year, for me, not so much. In February, it became obvious that our business, the Snowden Family Clambake, was in deep trouble. When the bank threatened to foreclose, my daughter Livvie hit the panic button and called my older daughter Julia home to bail us out. Julia did, but not without a lot of drama and a dead body. My kids thought they kept the seriousness of our financial problems from me, but with Julia living in my house and fighting with Livvie’s husband Sonny about every single decision…Let’s say I wasn’t as in the dark as they thought I was.

It would have been wonderful having Julia home, but she seems to accumulate dead bodies. In the summer, one rolled out of our clambake fire and a young employee of ours was the prime suspect. In the fall, a potential competitor of our business was caught in the lines under an abandoned lobster boat, and bringing up the body also brought up all kinds of unsavory business, some of it involving, ahem, the family. Finally, after Thanksgiving, a body was found in the walk-in refrigerator of the restaurant Julia is running in the off season with her boyfriend, the far-too-good-looking-for-his-own-good (in my opinion) Chris Durand.

I am happy to say that Livvie and Sonny are expecting their second child in February. And this time, they are even married. As Livvie always says, “I got engaged. I got married. I got pregnant. Just not in that order.” I am so looking forward to this new addition. Their older daughter, Page, is the light of my life.

I am off to put bows on the strawberry rhubarb jam we make in the spring to give to all the neighbors at Christmas. I do wonder why it is that funny grayish color. Julia is bringing an acquaintance from New York home for the holidays. Her name is Imogen Mary Ann Geinkes, pronounced, with initials, as I. M. A. Jinx. What could possibly go wrong?

Best wishes for a happy holiday season, and please join me in hoping next year is quieter than this!