by Samantha Kidd, Former fashion buyer turned amateur sleuth
as written by Diane Vallere
--
It’s amazing. Glorious. Fantastic. Did I mention Amazing? I’m talking about vacation the week before Christmas. And you know why it’s so amazing? Because I work in a department store—the kind where customers destroy tables of sweaters so they can find that size Medium for their Aunt Sally, only to change their mind and decide on a necklace instead. My friend Eddie is the visual director for the store and he can’t get through a sentence without using five curse words. He shaves his head this time every year because otherwise he’d just pull his hair out.

So how, you might be wondering, did I get vacation this time of year? That’s the other glorious part. I have a job at Tradava, but not in the store. I work in the advertising division on their magalog. (it’s a cross between a magazine and a catalog. Fashion people like to make up words.) While the rest of the store is focused on complimentary gift wrap on purchases over $25, I’ve been working on the spring/summer catalog, trying to predict what people will be wearing in May. Don’t tell anybody, but sometimes, when I’m not sure which trends are going to be hot, I rely on my trusty Magic 8-ball.

In two days, my boyfriend, shoe designer Nick Taylor, is going to come home from Italy. I’ve known him for over a decade but most of that time was as business colleagues. This is our second attempt at a relationship and I have high hopes that we’ve worked out the kinks. He does travel six months out of the year, which makes it a lot easier to hide my junk food habit and tendency to stick my nose into police business. Hey, it happens.


My friend Cat is eight months pregnant and I’m going to kick off my vacation with a girls’ night in at her house. Movies, popcorn, and the knowledge that I can sleep in as long as I want tomorrow…this holiday season has the makings of the best one EVER.
--
Season's Readings! Comment below with your favorite holiday outfit and be entered to win a full ebook set of the Samantha Kidd mystery series: that's five books + book 6, Pearls Gone Wild, due out later this month! 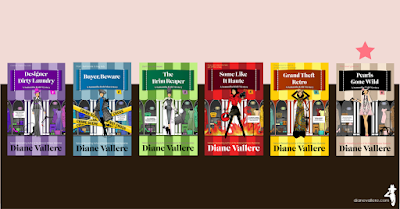