Hello folks, Carol Hill here. I’m one of the women who run the WISE Enquiries Agency, and I’ve been given the chance to tell you about some Christmas traditions we have here in Wales. This Christmas will be a special one for me and my husband, David – it’s the first we’ll celebrate as parents. Our son, Albert, won’t be able to understand what’s going on, of course, but we’ve decided now is the time to start traditions of our own, as well as observing those we’ve both grown up with over the years.

David’s English, not Welsh, but we share many traditions…most of which seem to revolve around food of some sort. There are the mince pies, of course; lovely deep little tarts full of moist mincemeat – I like to place a star of pastry on top, rather than have the entire top covered over, then I give them a dusting of icing sugar for an extra kick of sweetness. They’re David’s favorites, so I’ll make quite a few. I’ll be giving them as gifts to my co-workers Mavis, Annie and Christine too, and I’ll even dare to give some to the dowager duchess, Althea – though I expect her cook believes hers are superior to mine!

Neither David nor I are big fans of Christmas pudding, though we’ve both agreed we might introduce making one as Albert gets older – he might enjoy stirring the mixture…I know I did when I was little, though I still think it’s far too dangerous to drop coins into a pudding of any sort – that’s just an emergency visit to the dentist waiting to happen! Besides, the silver sixpence-pieces my mum used to drop into the puddings she made haven’t been in circulation since the 1970’s though I suppose five-pence pieces would do the trick…of breaking a tooth! 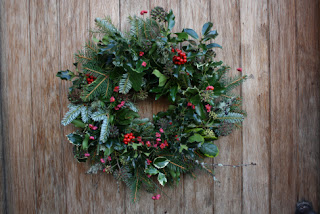 Thanks to a trip to Swansea market, we have a garland made of a mixture of holly and fir branches for our beautiful Georgian front door. I might add a couple of red ribbons for a truly festive touch. David and I enjoyed wandering around the market with Albert swaddled on my front...the smells and the sights were so festive, and there was a small choir singing in the center of the area where they display all the freshly baked breads, meat pies, home-made sausages and locally produced cheese selections. Not so unusual for there to be a choir singing in a market in Wales, but they were so good we stopped for quite a while to listen - you can't beat the harmonies of a good Welsh male-voice choir!

When I was little, it was a Big Deal to hang a large sock on the fireplace before leaving a mince pie and a glass of milk for Father Christmas (and a carrot or a potato for the reindeer) before we went to bed on Christmas Eve. I’m going to do that this year for Albert, then David and I can show him he’s been a good boy because he’ll get an orange in his “stocking”, not a lump of coal (yes – I did once get a lump of coal because I’d sneaked out of the house when I had chicken pox and visited my friend, who then became infected!).

On Christmas Eve David and I will do what I grew up doing – making toffee that you drop into a pan of water to swirl and cool…then we can put some on Father Christmas’s plate with his mince pie. I don’t think we’ll go to the midnight service at St. David’s Church, across the green, this year, because it’ll put Albert out of his napping/sleeping cycle, but we’ll enjoy hearing the bells ring out, I know, and we’ll go to the early service on Christmas morning.

And when it comes to Christmas lunch? Ha! Both David and I hate Brussel sprouts, so we’ve vowed we’ll never have them or serve them, so Albert won’t grow up with the annual argument about having to eat them or he’ll get no mince pies for afters!

Whatever traditions you observe, for whatever reason, at this time of year, I send you all the very best from my home in the village of Anwen-by-Wye, in Powys, Wales – where I’m doing my best to mix old and new traditions for the generation that is to follow. Nadolig llawen, a blwyddyn newydd dda (Merry Christmas, and a Happy New Year).

Cathy Ace is the Bony Blithe Award-winning author of The Cait Morgan Mysteries (#8 The Corpse with the Ruby Lips was released on November 1st) and The WISE Enquiries Agency Mysteries (#2 The Case of the Missing Morris Dancer was published in paperback in the USA & Canada on November 1st, and #3, The Case of the Curious Cook, was released in hardcover in the UK on November 30th).  You can find out more about Cathy, her work and her characters at her website, where you can also sign up for her newsletter with news, updates and special offers: http://cathyace.com/
Submitted by Cathy Ace