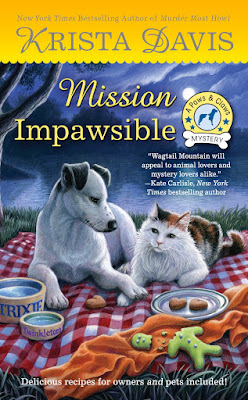 The Paws and Claws Mysteries


I am so excited! It's the first ever Animal Attraction matchmaking event in Wagtail. There are always a lot of cats and dogs around Wagtail, but today is special because we're supposed to mingle. I met a very cute yellow lab named Cooper. We've been hanging out together while my mom, Holly, helps people with boring papers.

From what I gather, we dogs and cats are supposed to introduce people to each other. I don't know why this is so complicated for humans. Every dog knows you just walk up to another dog and sniff. Your nose tells you everything. What breed the dog is, how old it is, what it had for lunch, whether it stole your peanut butter treat a few minutes ago, and much more.

People are so awkward. There's that odd thing they do with their hands. For a while, I thought they were passing each other cookies. That would be a fast way to make friends! Apparently that's not what they're doing. I understand with us around they have something to talk about, which takes off the pressure to say something clever.

I'd like to introduce my mom to Cooper's dad. After all, a cool dog like Cooper must have a terrific dad. But I'm not so sure about the little dog that looks like a Wookie. He's cute enough, but he's wearing shoes. I'm glad my mom didn't embarrass me that way. I think I'll pass on him.

PS. MISSION IMPAWSIBLE comes out on February 7th, but because you were nice enough to read this, Krista says I can give away two copies! Leave a comment with your name and email address so she'll know where to find you if you win. Her nose isn't as good as mine.