Why Christmas Starts in August 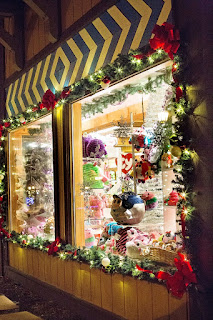 You people always complain about holiday decorations going up too early, but let me tell you something about working in a department store at Christmas. It’s because of you that my team has to start setting things up before Halloween.

First, the buyers place the orders for this stuff in June, and it starts to arrive in the store in August. There’s only so much stockroom space, especially we’re also getting in gift ideas like gloves and key chains and sweaters and wallets. And half of them are in gift boxes, which takes up even more space, because some genius at the top of the food chain decided that customers (yes, you) aren’t bright enough to see a sweater on a table and think, “that would make a good gift for Uncle Johnny” unless it’s nestled in between some tissue paper in a box. (How do you like knowing the store manager thinks you’re not very bright?)

So the decorations start arriving in August. That means my whole visual team is on the holiday shop. That’s that nook of the store where everything else gets shoved aside to make room for ornaments, trees, wrapping paper, and fruitcakes. Maybe you haven’t noticed us working on that. Probably because we’re in by six A.M. and a week into the project we’re all so coated in glitter that we start to blend in with the setting.

The holiday shop opens on October first, which means visual moves on to the rest of the store. Placement of the trees, outposts for gift ideas, more cookie tins and fruitcakes (What is up with the fruitcakes, you ask? If people would stop buying them, the buyers would stop ordering them. Just sayin’.) And it’s not just decorated trees, either. People want displays and every year they demand bigger and better. I blame it on that fancy Texas department store with the outrageous gift catalog. They trained people to expect the unexpected.

You might be sitting there thinking that at least we get to enjoy the holidays because our work is done early. YOU’RE WRONG. Have you ever stopped to look at the condition of a department store at the end of the day in November or December? It’s like a pack of wildebeests tore through and mauled the place.
I don’t talk much around the holidays. When I do, it’s kind of like that scene in A Christmas Story where Ralphie beats up Scut Farcus, and the store managers tend to frown on that type of language. The only saving grace to this time of year is that my buddy Samantha Kidd, who is a magnet for trouble, can’t possibly rope me into one of her investigations.

Hold on—the phone is ringing. Speak of the devil—it’s Samantha. “I shouldn’t even take your call. Vacation the week before Christmas while I’m stuck here round the clock. Last night a tree fell over and pinned Santa. Destroyed three of the elves. I had to replace them with garden gnomes. If the store manager sees that, I’m done.”

“Have you heard from Cat?” she said.

“Her situation is a little more dire than premature labor. Her husband was murdered last night.”

Looks like I spoke too soon. Gotta go. --Eddie