A Fine Mess to Comb Through

GIVEAWAY! Please leave a comment below and you’ll be entered to win a signed copy of MURDER, CURLERS, AND CREAM, or, if you prefer, the ebook. The Giveaway ends at midnight Friday, February 10th. The winner will be announced Saturday, February 11th. Please include your email after your comment. Good Luck! 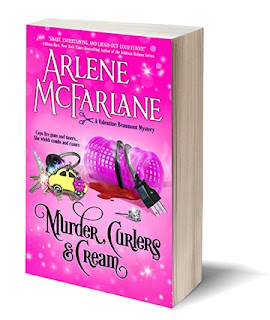 By Valentine Beaumont of the Murder, Curlers Series
By Arlene McFarlane

My name is Valentine Beaumont, and I’m a beautician with a problem. Make that four problems. I have a mother who feels I won’t be complete until I’m married; I run a salon known as Beaumont’s with three diverse employees ranging from extremely gifted to she’s-holding-a-razor, leave-while-you-can; my business is all but dead because of my past fiasco involving catching a criminal by wrapping a perm rod around his unmentionables; and as of today, I’ve got a murdered client in the facial room.

Is it too late to add another problem? Because of that past perm-rod incident, everyone in Rueland, Massachusetts feels I’m inept, bordering on crazy, including Tall, Dark, and Handsome, Detective Romero, who was coined TD&H by one of my employees. Pain-in-the-butt is what I call him.
That past incident is not something I’m proud of. Maybe I overreacted by using my beauty tools to catch a killer. But it was either him or me. He had a knife. I had a perm rod. The choices weren’t many.
I don’t know who today’s murderer is, but I can say this: everyone seems guilty. The guy who fled the scene, the client blubbering into his hands, the English twins who love to gossip. Even the perky co-ed is acting strange. Detective Romero may be lumping me in with this motley crew of suspects, but if it’s the last thing I do, I intend to untangle the crime and reveal the real killer.

Arlene McFarlane is the author of the Murder, Curlers series. Previously an aesthetician, hairstylist, and owner of a full-service salon, Arlene now writes full time. When she’s not making up stories, or being a wife, mother, daughter, sister, friend, cat-mom, or makeover artist, you’ll find her making music on the piano.
Arlene is a member of Romance Writers of America, Sisters in Crime, Toronto Romance Writers, SOWG, and the Golden Network. She’s won and placed in over 30 contests, including twice in the Golden Heart and twice in the Daphne du Maurier.
Arlene lives with her family in Canada.