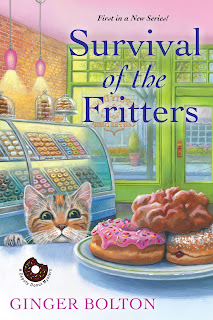 by Emily Westhill from SURVIVAL OF THE FRITTERS by Ginger Bolton

I love donuts and coffee, and so does my father-in-law. Tom is that guy back there in the kitchen lifting another basket of yummy fritters out of the fryer.

Tom and I opened Deputy Donut after I burned out as a 911 operator and he retired from the Fallingbrook police department, where he was chief.

Why did we call the shop Deputy Donut? It has a lot to do with the police officers whose headquarters are up the street and who threatened to arrest me (not seriously) if I didn't open a cafe where they could enjoy their breaks--and the donuts and coffee they'd sampled at parties I'd catered.

Don't tell those cops, but the shop is actually named after my cat. She's a tortoiseshell tabby, otherwise known as a torbie. Like some other tabbies, she has donut-shaped circles on her sides. She's spunky, cuddly, and talkative. Most of the time, I shorten her name to Dep.

She does comes to work with me, but the picture on our brochure is misleading. Due to health regulations, Dep is not allowed in the kitchen or here in the dining and sales area. She stays back there in Tom's and my office. You can see her now, blinking at us from the windowsill, and you can probably tell that her room has windows on all four sides, so she can supervise her entire realm. You might notice the kitty staircase and carpeted "tree." They lead up to a catwalk above the windows. She likes to go up there and drop catnip mice on our heads or our keyboard.. She has everything she needs in her kitty playground, and Tom and I check on her often. At night, she goes home with me.

You wouldn't think that Fallingbrook, tucked among hills, lakes, and forests in northern Wisconsin, would have much crime, but we've had two shocking crimes in the past five years. However, I feel safe in a shop co-owned by a retired police chief. In addition, my law-enforcement friends come in here often. And my guard cat, Dep, can puff up enough to scare anyone. Almost...

Oops, gotta go. The Knitpickers, six women who spend nearly every weekday morning knitting and gossiping over coffee and donuts, are settling in at their favorite table.

Enjoy your cappuccino and fritters! 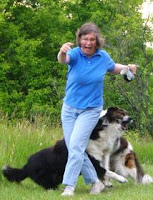 Ginger Bolton is also known as Janet Bolin, servant of rascally pets and author of the Threadville Mysteries.

SURVIVAL OF THE FRITTERS will be in stores in February, 2018.