A secret so big I'm going to burst! 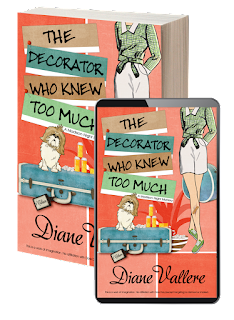 When my husband Jimmy first asked me what I thought about him inviting Hudson to Palm Springs to help him work on his development project, I thought it was a good idea. Hudson is my brother and he's a genius at building things, and his new girlfriend, Madison, is an interior designer. Jimmy seems like he’s been having a hard time getting this project off the ground and it might be good for him to have help. Besides, it’ll be nice to have another couple around. Sometimes Jimmy and I don’t get along very well and we could probably both use a break. Last night I caught our little girl watching us instead of the TV. You know something’s wrong when we’re more interesting than Nickelodeon!

I only met Madison that one time, but I liked her. She’s smart and brave and independent. I bet Jimmy will make fun of how she dresses in clothes from the sixties, but I bet she doesn’t care. I wish I was more like that, that I didn’t care what people said about me behind my back. Maybe they don’t. Maybe nobody even notices me, even when I do something that isn’t very good.

It’ll be good to have another woman to talk to. I don’t have tons of girlfriends, mostly just other moms of girls Heather’s age, and I can’t talk to them about my personal life—that would be too weird when we saw each other at school events. But Madison’s only going to be here for two weeks and then she’ll go home. Unless I can convince her and my brother to move to Palm Springs. I’ve been working on Hudson for years now, but he never wanted to leave Dallas. I’m pretty sure that’s because of how he felt about Madison, so maybe now, there’s hope.

Not having someone to talk to can get pretty lonely. Inviting company was definitely a good idea. Nobody knows what my life has been like lately, and if I don’t tell someone my secret soon, I’m going to burst!
Submitted by Unknown

Email ThisBlogThis!Share to TwitterShare to FacebookShare to Pinterest
Labels: book 4, Diane Vallere, mad for mod, Madison night, secrets, shoescluesclothes, the decorator who knew too much