I’m Gina Albertson and I own an aromatherapy shop in Cranberry Cove where my son and step-daughter live.  It’s a nice little town with a main street called Beach Hollow Road where there are a number of shops including Bart’s Butcher, Gumdrops, the Cranberry Cove Diner and a place called Twilight run by Tempest Storm.  It’s a new age shop and if there’s any place the locals are less likely to visit than an aromatherapy shop, it’s a new age shop.


We do okay though thanks to the tourist trade.  It’s June and people are beginning to come to town although the temperature of Lake Michigan is still too cold to tempt me into the water.


I was rearranging my vials of essential oils when the door opened and Tempest breezed in.  She was wearing a dark blue caftan and had a large amulet hanging from a silk cord around her neck.


“Look what I’ve brought,” she said as she approached me.


She reached into her oversized tote bag and pulled something out.


I laughed.  I remembered playing with one of those when I was a kid.  Betty Sue next door and I used to ask it to tell us who we were going to marry.  One time it spelled out the name George and poor Betty Sue burst into tears because the George in our class was short with pimples and glasses.


Tempest moved aside some things on the counter and set up the board.


She made a dramatic gesture.  “I feel as if romance is in the air, don’t you?”


“I did just meet the most delicious man in Book ‘Em the other day.  He’s a writer.”


“Let’s see what the board says then.”


Tempest rested her fingers on the planchette and closed her eyes.  “Is there going to be a romance in Cranberry Cove?” she said in a serious voice.


The planchette began to move.  I wondered if Tempest was moving it herself to fool me.  Slowly the word yes was spelled out.  We thought it had stopped moving, but it began to move again and this time pointed to the numeral 2.


“See,” Tempest said, opening her eyes.  “Not one romance but two.”


She put her fingers back on the planchette and closed her eyes again.  Once again, it began to move, this time spelling out the word wedding.


Tempest gasped.  “Looks like there’s going to be a wedding in Cranberry Cove,” she exclaimed.


I pointed at the Ouija board.  “Two if that thing is to be believed.”
Have you ever played with a Ouija board?  What did it tell you?
Look what came in the mail! 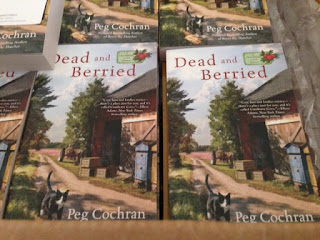 Amazon
Barnes and Noble
Dead and Berried will release May 2 but I am offering one copy to someone who leaves a comment below!
Submitted by Peg Cochran