#Giveaway! Five Years of Style and Error by Samantha Kidd 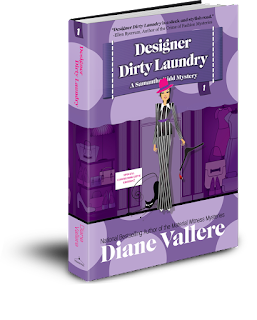 Hi! I'm Samantha Kidd. You might know me from some of the crimes I've helped solve around Ribbon, Pennsylvania. That's me on the cover of that book to the left. Don't you just love that fuchsia fedora? Me too. (I'm assuming you said yes, because, hello. Fuchsia fedora, people! What's not to love?)

I almost can't believe it, but I just helped solve my seventh investigation. You probably haven't heard much about the most recent one because I've been told I can't talk about it until June 13*. But because this is something of an anniversary for me (I first showed up in that book over there five years ago!) I thought maybe you were curious about how a former fashion buyer got mixed up in homicide investigations. Trust me, it's not because I'm attracted to our town's homicide detective. You should see the kinds of shoes he wears! Um, no. Besides, he's married and has a daughter my age (or so he says, though I sometimes wonder if she's merely using a fictitious daughter to illustrate how someone my age should act.) It started when I gave up my career as a buyer for a luxury retailer in New York City and moved to Ribbon to buy the house I grew up in. Yep, I gave up job security and a fat paycheck so I could rewind and try to figure out what would make me happy. I had a job lined up. I had a house lined up. I had a plan. And then, BOOM. My about-to-be boss turned up dead. At the store where I wasn't technically hired yet.

A lot has happened since them. The crime rate in my town is on the rise. One of my friends had a baby. I've actually gotten a job--with benefits and paid vacation!--and the local homicide detective seems to have promoted me from "tolerates her" to "occasionally listens to what she has to say." I've busted up a handbag knockoff ring at a hip new department store, helped save an exhibit of vintage hats at the local museum, caught an arsonist, uncovered an old crime, helped catch my friend's husband's murderer, and gotten mixed with the mafia. (shhhhh--I'm not supposed to talk about that one until June 13!*)

Oh, and I got engaged. Wow, life really has changed since I first showed up! But sometimes I still think about something I said way back in that first adventure: "My life was like fabric in the clearance bin. Sure, some of my yardage had already been used, but there was enough on the bolt that with a little planning, and if I cut corners, I could still make something really fabulous out of it."

That's how I feel most of the time. Like a work in progress, still trying to make something really fabulous out of what I have. Know what I mean?

*CEMENT STILETTOS, my 7th adventure, comes out June 13!
--
GIVEAWAY TIME! Leave a comment about how your life has changed in the past five years enter to win a special, commemorative hardcover edition of DESIGNER DIRTY LAUNDRY, Samantha Kidd's first adventure!