Hiya, Carol Hill here. I’m one of the four female private investigators who operate the WISE Enquiries Agency. You might not have heard of us because we run our business out of a lovely converted barn on the Chellingworth Estate in Powys, Wales, so . . . not exactly at the center of the universe. Mind you, we get our fair share of intriguing cases to work on, even though we all live in rural splendor in Anwen-by-Wye, a lovely little Welsh village close to the river Wye.
You know the type of place I mean, I’m sure – all sorts of different homes clustered around the village green . . . some of them are thatched cottages built in the 1500s, some – like the house I live in – are the product of the Georgian period. My house used to be the doctor’s home in the village. Of course, the days when every village had its own doctor are long gone now, but that’s a different story.

Anyway, as I say, I live in Anwen, but, now that it’s summer, my husband David and I like to take the odd day-trip. It seems to take forever to gather together all the bits and pieces I need to be able to look after Albert for a day away from home; he’s four months old now, so I still carry him about in his sling, but, otherwise, there’s a lot of nappies, toys, blankets and so forth to be hauled around too. David does that bit.

Recently we went to the coast – Swansea and Mumbles, to start with. I grew up in a rural area in West Wales called Carmarthen, and when I was little my mam and dad would take me to Swansea, to enjoy the pier there, which is quite something. They’ve recently done it up a bit, so David and I thought we’d go and take a look. I love piers. There’s something so frail, yet so bravely beautiful about them, striking out into the sea the way they do. They use the one in Mumbles to launch the local lifeboat, so the Royal National Lifeboat Institute has a little shop right at the end of the pier, where there are some lovely restored benches to sit on, to enjoy the view. 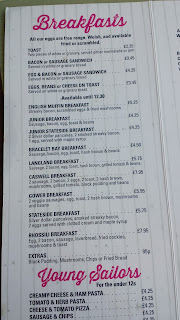 We had breakfast in a little restaurant just at the head of the pier. David tried the one served with laverbread. I didn’t tell him what it's made from . . . until after he’d tried it. That’s because it’s seaweed, boiled and boiled for hours to make it “palatable”. His face as he ate it was a picture, and then – when I told him all about it – I think I was lucky he didn’t throw up there and then. David’s English you see, so growing up eating all sorts of things you can get for free from the sea wasn’t “his thing”.

Here, in South Wales, we love our laverbread, though I can understand why it hasn’t caught on much outside the region. It’s an ancient delicacy – first mentioned by Gerald of Wales back in the 12th century – then popular with the men who worked the mines in the 1700s. It’s cheap (not so much these days, because the weed used is a bit more rare, and, of course, producing it is labor-intensive, and very smelly!) and it’s packed full of vitamins and minerals.

I grew up speaking Welsh, not English; we call it “lawr”, whereas it’s “laverbread” in English . . .which I think might have started as  a bit of a joke on the people who didn’t speak Welsh, because it makes it sound quite harmless.  Which it is. When you’re used to it!
When we had tea later that same day, at the Bay Bistro in Rhossili, they had some other seaweed-based products on sale there. We gave them a good look, but David says if they come in our front door, he’s going out the back! I don’t mind a bit of seaweed myself. I grew up having laverbread as a treat on a Saturday, if Mam had been to Swansea market on a Friday, where they sell a lot of it. Fried cockles and laverbread, with bacon, and bread and butter – that was a meal that would keep me going all day. But now? Well, I think of it as a health food, almost. But it’s got a pretty strong flavor, so I’ll wait until I’m not feeding Albert any longer, then I can have some for myself.

Meanwhile, I might start to use it as a sort of condiment, and not mention it to David. I know I can order the items I saw in Rhossili online, so maybe I’ll sneak them into the house that way. I’ll think about it, and see how devilish I feel next week. 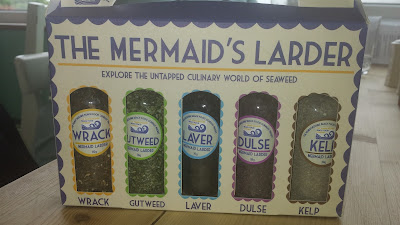 Cathy Ace is the Bony Blithe Award-winning author of The Cait Morgan Mysteries and The WISE Enquiries Agency Mysteries (#4, The Case of the Unsuitable Suitor will be released in hardcover in the UK in September 2017 and in the USA & Canada on January 1st 2018).  You can find out more about Cathy, her work and her characters at her website, where you can also sign up for her newsletter with news, updates and special offers: http://cathyace.com/
Submitted by Cathy Ace